The heat is on for the world's biggest laser

The National Ignition Facility in the US is pursuing one of the grand challenges of science: controlled thermonuclear fusion in the laboratory. Our American correspondent Breck Hitz talks big science with Edward Moses, the director of NIF's multibillion-dollar research programme.

As hero experiments go, the US Department of Energy's $4 bn (€3.1 bn) National Ignition Facility (NIF) is right up there with the biggest and best of them. When it's operating at full belt, the world's largest optical instrument – it's roughly the size of three football pitches – will combine 192 laser beams to generate a peak power of 500 trillion watts – 1000 times the electrical generating power of the US – and a pulse energy of 1.8 MJ of UV light. 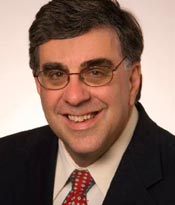 By focusing the super laser onto a tiny pellet of hydrogen isotopes (deuterium and tritium), NIF scientists hope to initiate and study nuclear fusion reactions in the laboratory. In doing so, they will recreate the temperatures and pressures found in the cores of stars and giant planets, opening up the possibility for ground-breaking discoveries in planetary science and astrophysics. Those same fusion reactions are also the basis of the hydrogen bomb, which means that NIF will enable researchers to study nuclear weapons without actually testing any weapons.

The final element of NIF's remit, and some think the most important, is to carry out proof-of-principle research into energy generation from laser-driven fusion, work that could one day yield a limitless supply of carbon-free electric power. With experiments scheduled to begin next year to realize the critical step of scientific "breakeven" – the elusive goal of producing more fusion energy out than laser energy in – Breck Hitz met up with NIF director Edward Moses at the Lawrence Livermore National Laboratory in California to hear more about NIF's research programme and the benefits that could flow from it.

BH: Why is breakeven important? EM: Breakeven is a major milestone on the path to fusion power for mankind. Fusion energy has a practically inexhaustible source of fuel – hydrogen, as in water – and produces negligible radioactive waste. 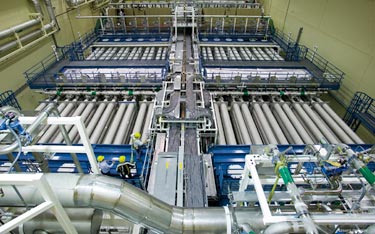 Most of the energy in the universe is the result of hydrogen fusion. Controlled fusion has never been performed on Earth in a manner that could be useful for energy generation, fundamental science or national security. NIF will be the first place, if everything goes as we think it will, that will demonstrate controlled nuclear burn.

"If everything goes as you think it will." So what might go wrong? Controlled fusion has been a grand challenge for decades. People first started to think that it might be possible during the speculation era in the middle of the previous century. Then there was the evaluation era, when people started figuring out what kind of laser would be necessary to create controlled fusion. Thirty years ago, some people thought carbon-dioxide lasers might offer the best approach, because their photons are so inexpensive. We now know that the 10 µm wavelength is wholly unsuitable for fusion. 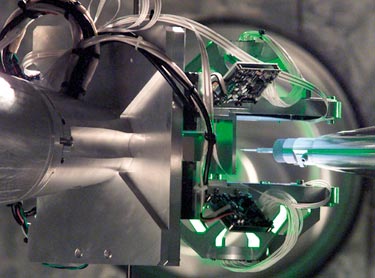 Today at Lawrence Livermore [the US government lab that is home to NIF], we have an operational facility that meets all of the requirements, as we understand them. We have targets that meet the specifications, we have all the diagnostics and cryogenics, we have the UV laser energy, and we are ready to begin an experimental campaign. When you look at all that, we believe we're on track. But there are still some physics issues to deal with.

What are those physics issues? Some of these concerns were raised by Mike Dunne [head of the Central Laser Facility at the Rutherford Appleton Laboratory in the UK] in a recent issue of Physics World (March 2009, p7). As we've known for many years, there are two fundamental things that can go wrong in fusion experiments. The first is laser-plasma instabilities. The laser creates plasma, and that plasma can distort the incoming laser light. That distorted laser light can then distort the plasma.

It's a complicated problem, but we are about to begin experiments that for the first time will create the conditions of interest [i.e. the extremes of temperature and pressure necessary to initiate fusion]. We will report our conclusions before the end of this year. Once the plasma physics is under control, the second potential physics issue could arise from accelerating the target to a million miles per hour. Rayleigh-Taylor hydrodynamic instabilities could start to grow and prevent a very hot spot from forming. We have worked very hard to make the target ablators and frozen DT smooth and uniform to mitigate this effect [so that the heating isn't ruined by uneven compression].

You said that NIF will contribute to fundamental science and national security. Can you elaborate? It's no secret that a major rationale for NIF is its contribution to the [National Nuclear Security Administration] Stockpile Stewardship programme to enable a safe and reliable deterrent without the need for nuclear tests. This is a two-pronged approach using massively parallel computers and the NIF. Together, we will write new physics codes and test them. We believe this combination will eliminate the need for nuclear testing. NIF will also make many contributions to basic science. For example, it will enable astronomers to probe the mysteries of astrophysics in the laboratory by creating the lifecycle conditions of a star or the formation of planets.

What are the major technology breakthroughs of NIF? They are what we call the "seven wonders of NIF". First, to produce laser glass quickly enough to meet our construction schedules, we worked with two optics vendors to develop a new production method that continuously melts and pours the glass. Once cooled, the glass is cut into pieces and polished to NIF's specifications.

Second, our aggressive construction schedule meant that we needed to find a way to rapidly grow KDP (potassium dihydrogen phosphate) crystals. KDP crystals are used to convert the laser beams from infrared to ultraviolet in the final optics assemblies. Their rapid-growth process is incredibly effective; crystals that would have taken up to two years to grow by traditional methods now take only two months.

Third, we wanted to design NIF as a master oscillator with a multipass amplifier. To do that, we needed a way to switch the pulse into and out of the amplifier. Our answer was the plasma-electrode Pockels cell, which allows the laser beams to make four passes back and forth through the amplifiers. This was a true enabling breakthrough for NIF. Without it, NIF would have been hundreds of metres longer.

Fourth, we developed very sophisticated pre-amplifiers that could precisely control the shape, pattern and timing of the laser beams' input from the master oscillator. This beam flexibility lets us perform a wide range of experiments on NIF.

The fifth "wonder" is the deformable mirror, an adaptive optic that uses an array of actuators to bend its surface to compensate for wavefront errors in the laser beams. Sixth, we had the challenge of target fabrication. NIF's targets have to be designed and fabricated to meet precise specifications for density, concentricity and surface smoothness. The manufacturing requirements for these targets are extremely demanding; the components have to be machined to within an accuracy of less than 1 µm.

Finally, making sure that all of NIF's systems work together requires one of the most sophisticated computer control systems anywhere – in government service or industry. Every experimental shot requires the coordination of complex laser equipment. About 60,000 control points for electronic, high-voltage and optical and mechanical devices – motorized mirrors and lenses, energy and power sensors, video cameras, laser amplifiers, pulse power and diagnostic instruments – must be monitored and controlled.

Assuming breakeven is achieved next year, what happens after that? Breakeven is the beginning of the fusion programmes, not the end. For energy, you need more than scientific breakeven; you need "wall plug" breakeven, where the energy coming out of the entire process is more than the total energy going in. You need a high repetition rate and very high reliability.

We have been working for several years on the Mercury laser, which is a diode-pumped, 10-shots-per-second laser, based on ytterbium-doped strontium fluoro-apatite (Yb:S-FAP). We chose that relatively unknown material for its low quantum defect, its upper-state lifetime and its emission cross-section. The Mercury laser has demonstrated the feasibility of a high-repetition-rate, electrically efficient driver for a laser fusion plant.

Another interesting concept that we are developing is the Laser Inertial Fusion Engine (LIFE) laser. It can run as a fusion engine or it can be used to burn nuclear waste. If the LIFE programme is successful, it will enhance the energy efficiency of fusion and, perhaps even more importantly, dramatically shrink the world's stock of spent nuclear fuel.

NIF is already solidly booked for experiments through 2015. Something that would give me great pleasure is for someone or some group to get a Nobel prize using NIF – a facility that has capabilities that exist nowhere else.

Laser fusion is not without its detractors, one of the more articulate of whom is author Charles Seife. In his recent book (Sun in a Bottle, Viking, 2008), he says that optical damage will be a major inhibitor of laser fusion.

Optical damage is an important challenge for a commercial laser-fusion plant, but in the long run I think it will be solved, for several reasons. The technology and science of hardened optical surfaces is expanding exponentially. NIF now has optics qualified at 8 J/cm2, more than 10 times what it was when we started, and we have programmes in place that will double that. I am confident that continuing work in this area will satisfy the requirements of future laser-fusion systems.

That point of view represents a deep misunderstanding of what the Stockpile Stewardship programme is and what physics conditions can be studied on the NIF.

The NIF and its role in the Stockpile Stewardship programme have been reviewed by a variety of blue-ribbon panels associated with strategic defence, and they all concur that NIF will play a major role in enabling a safe and reliable deterrent without nuclear tests.