As recently as 2002, China imported all of its LED chips. The country now meets half of this demand with domestic production and is making the transition from incandescent bulbs to solid-state lighting. Richard Stevenson catches up with the progress.

The Chinese government is determined to create a domestic LED industry to serve all of its lighting needs. The country currently uses 10–12% of its domestic energy for lighting, which equates to 300 bn kilowatt-hours of electricity every year. But those in charge want these figures to fall substantially by replacing conventional, inefficient forms of lighting with LEDs. 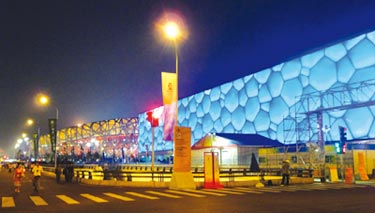 To aid the development of a national LED industry, China is investing heavily in the technology. During the current five-year plan, which runs from 2006 to 2010, the country is ploughing RMB350 m (€36.7 m) into LEDs, through the Ministry of Science and Technology.

That investment is starting to pay off. According to Wu Ling, director of the China Solid State Lighting Programme Office, LED sales have increased six-fold over the last five years, device efficacy is rocketing towards 100 lm/W and chips are serving a wide variety of applications.

In terms of domestic market revenue, sales have risen from RMB10 m in 2003 to more than RMB65 m last year. LED applications accounted for the biggest slice in 2008 (RMB45 bn), with packaging and chip manufacture netting RMB18.5 bn and RMB1.9 bn, respectively. 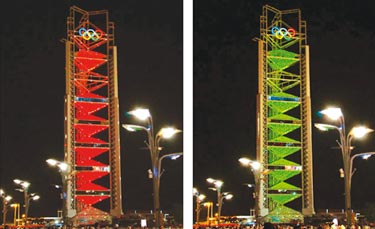 Building a supply chain Ling explained that these revenues are shared between 3000 companies: 2000 firms focusing on applications, 1000 LED packaging specialists and about 50 companies involved in LED chip production. Many are located in one of the seven national LED industry parks in Dalian, Shijiazhuang (Hebei), Yangzhou, Shanghai, Xiamen, Nanchang and Shenzhen, but Ling says that other cities also have competitiveness in all sections of the industrial chain.

Imported and domestically produced LEDs now serve a wide variety of applications. Ling said that the breakdown of the markets employing LEDs in 2008 was: 28% architectural lighting; 27% signs and displays; 22% mobile appliances; 7% illumination; 6% signals; 2% automotive lighting and 8% in other categories.

One area where China has shown massive improvement over the last few years is LED chip manufacture. Ling said that all of its chips had to be imported in 2002, but domestic production fulfilled 5% of the chip demand in 2003 and continues to increase year on year – in 2008 the figure was 49%. By then LED chip manufacture had soared to 46 billion LED units, which were predominantly GaN- and AlGaInP-based devices (table 1).

Although China's LED industry is going from strength to strength, the performance of its premium high-brightness products still lags behind that of the world's leading manufacturers. "Chinese companies are small-scale and a gap in product quality exists compared with overseas manufacturers," admitted Ling. She pointed out that most of the domestically produced LED chips are deployed in medium-to-low-end applications and that the country imports 85% of its power chips.

However, power-chip efficiencies are increasing fast. In 2005 the best packaged white LEDs made in China delivered 30–35 lm/W at 350 mA using imported power chips and just 20–25 lm/W when employing a domestic equivalent. Now, packages with domestic LED chips are hitting 80–90 lm/W at 350 mA. 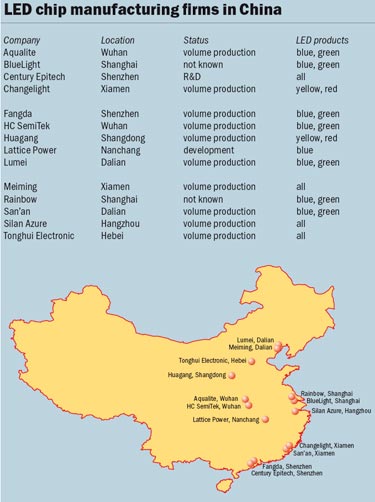 Joined-up thinking Progress has not just been spurred on by the current five-year plan, which has earmarked 33% of the funding for advanced R&D (the rest has been divided into 29% for key applications, 29% for aiding the LED industry and 9% for funding efforts to improve standards and testing). Funding from the National Solid State Lighting programme is also helping to drive up LED efficacy. "Its mission is to reach 130 lm/W for an R&D chip by 2010 for general lighting applications and to realize 100 lm/W in mass production," said Ling.

When domestic high-power LEDs are available they will start to penetrate solid-state lighting applications that are just starting to emerge. "There are already some showcase lighting projects in streets, underground parking lots, shopping malls, schools and metro systems," explained Ling. "With the development of energy saving and the expansion of domestic demand, LED lighting is entering an important historical period for further development."

As domestic LED performances improve, the threat of legal action from the established LED makers increases. However, it appears that the Chinese LED industry is taking the issue of patents and intellectual property seriously. Chipmakers are filing for Chinese and US patents, and Ling says that in some cases they are trying to obtain international patents through mergers with foreign firms. The country is carrying out LED research in several universities and Ling's organization is trying to ensure that any breakthroughs will be converted into intellectual property for LED chip manufacturers.

There is no doubt that China is quickly evolving into a major force in the global LED industry, with technology that is catching up the leading chipmakers. This has to be good news as competition from China will help to drive down prices and make a more compelling case for solid-state lighting.