Real-time mapping of a patient's radiation dose during cancer treatment is a step closer thanks to researchers in the Netherlands. 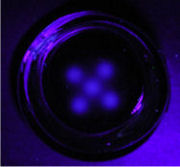 The ability to accurately measure delivered dose is an essential part of any radiotherapy procedure. With this in mind, researchers at the Technical University of Delft in the Netherlands are developing a new technique that could one day enable 3D fluorescence imaging of dose distribution during radiotherapy (Phys. Med. Biol. 54 3185).

Their method is based on a process called radio-fluorogenic copolymerization, or RFCP. RFCP involves radiation-induced polymerization of a liquid monomer. The monomer contains a small amount of a non-fluorescent compound that becomes fluorescent when incorporated into the growing polymer chain, with an intensity proportional to the radiation dose. The fluorescent product formed upon irradiation is a high-molecular-weight polymer, opening up the possibility of using RFCP for 2D and 3D dose imaging.

"We were motivated by the idea that the RFCP effect could ultimately be used to make 2D and even 3D fluorescence images of the dose distribution in tissue-equivalent phantoms for testing radiological treatment procedures," explained John Warman of the university's Reactor Institute Delft. "If the polymer could be formed within a quasi-rigid gel matrix, then it would be immobilized and a fixed fluorescence image of the spatial distribution of radiation dose would be created."

The first challenge that Warman and colleagues faced was to ensure that the RFCP technique could be made sensitive enough to monitor dose levels relevant to radiotherapy procedures, i.e., less than 1 Gy. As such, the high fluorescence yield of RFCP compared with previous radio-fluorogenic methods was particularly beneficial.

For every reactive free radical formed upon irradiation of the RFCP solution, a chain reaction results in the co-polymerization of tens to hundreds of thousands of monomeric molecules, increasing the effective yield of the fluorescent product. "Even with the small concentration of fluorogenic probe molecules present (around 100 ppm), an order of magnitude more of these molecules are made fluorescent than the number of free radicals produced by the radiation," Warman explained.

Firstly, they recorded the MMA/MPy probe's fluorescence output whilst it was moved into and out of the chamber's irradiation zone. The probe was subjected to three successive 60-minute radiation exposures (interspersed with 10-minute periods of no irradiation) at dose rates of 0.27, 0.90 and 3.76 Gy/min. The integration period was 20 s.

During irradiation, the fluorescence output (measured at 370–440 nm) increased linearly with accumulated dose. When the chamber was raised, the output intensity remained near-constant, indicating minimal post-irradiation effects. The researchers also noted a prompt increase/decrease in emission immediately after lowering/raising the probe. They attributed this to radio-luminescence from the optical fibre, plus a possible contribution from Cerenkov radiation.

The team then repeated the experiment using the tBuA/MPy probe. The intensity increase with exposure was much greater with this solution, so they reduced the irradiation periods to 10 minutes each. Again, fluorescence emission increased linearly with accumulated dose and remained constant when the probe was raised. The higher sensitivity of tBuA enabled data with a reasonable signal-to-noise ratio to be obtained using an integration time of as little as 2 s.

In both cases, the rate of intensity increase during irradiation was larger at higher dose rates, with a linear dependence upon the square root of the dose rate. The researchers note that in treatments using variable dose rate – such as image-guided radiotherapy using multileaf-shaped, overlapping X-ray beams, for example – interpretation of RFCP data could prove complex.

Comparing the performances of the two solutions in a radiotherapy-relevant regime (0.27 Gy/min with an accumulated dose of 2.5 Gy) revealed that only tBuA/MPy was accurate in this range, with MMA/MPy exhibiting around 20 times more uncertainty. The authors note that MMA, which exhibits good linearity up to doses of several hundred gray, would be ideal for measuring larger total doses used in equipment sterilization, for example.

"We have been able to produce an optically clear radio-fluorogenic gel matrix in which the spatial resolution of the fluorescence image is 0.1 mm or better," Warman told medicalphysicsweb. "We hope, in the not too distant future, to demonstrate that the method can be used to image multi-directional X-ray beams, proton-beam tracks and the dose distribution around radioisotope sources used in brachytherapy. We also hope to obtain funding for advancing the technique to a more universally applicable level."

• This article first appeared on our sister website medicalphysicsweb.org.