The advent of cheap and efficient green lasers is eliminating one of the last remaining hurdles to the commercial success of laser displays and laser television. As Breck Hitz explains, laser vendors are rolling out a raft of innovative products to drive market growth.

Laser displays can deliver more than twice the colour gamut of LCD screens or plasma displays, an advantage that's reinforced by a thin, lightweight package that offers greater energy efficiency versus the competing technologies. What's more, unlike LCD or plasma products, laser displays do not degrade over their lifetime, which is expected to exceed 50,000 hours. 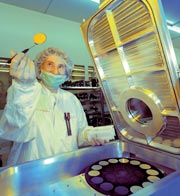 Despite these performance benefits, laser television to date has registered only limited commercial success. Until the first major electronics player, Mitsubishi of Japan, entered the market, no manufacturer had recorded significant sales. Mitsubishi's 65 inch model (which retails for around $7000) was introduced with considerable fanfare in October 2008, though the company has been less than forthcoming with sales figures. Earlier this year, production was also halted temporarily for "tooling problems" unrelated to the lasers' performance, according to Mitsubishi's David Alhart.

One of the biggest challenges to the commercial success of laser television is designing a suitable green laser. A television display requires three colours – red, green and blue (hence the term RGB display) – and the optical approach favoured by most designers is to employ direct-diode lasers for the red and blue light. There are no green diode lasers, however, which means an alternative approach is necessary: frequency-doubling of an infrared laser.

At Mitsubishi, engineers used slightly modified edge-emitting laser diodes intended for DVD reading and writing for the red (640 nm) and blue (447 nm) sources. For the green (532 nm) laser, they used an unusual planar-waveguide configuration for both the fundamental and second-harmonic wavelengths (figure 1). Both the Nd:YVO4 and LiNbO3 waveguides were several microns high and several millimetres wide. The Nd:YVO4 section was 1.5 mm long, and the LiNbO3 section was 4 mm long.

The Mitsubishi engineers pumped the tiny Nd:YVO4 laser with a linear laser-diode array (a bar) with 15 individual ~100 µm-wide emitters separated by ~200 µm. This pumping geometry created 15 different lasing channels in the Nd:YVO4 and LiNbO3 waveguides. Each channel was guided by the waveguide in the vertical direction and focused by thermal lensing in the horizontal direction. The engineers induced the thermal lensing by designing the heat removal so that a parabolic temperature gradient existed in the transverse direction across each of the 15 channels. Spatial interference effects, in the far zone where the 15 green beams overlapped, were not critical because the beam was ultimately expanded to cover the entire television screen.

The diode array produced 27 W of 808 nm output, from which the doubled vanadate laser generated 11.4 W of green power for a 42% optical efficiency (from 808–1064 nm to 532 nm). The overall electrical (wall-plug) efficiency was 21%. The Mitsubishi engineers modulated the laser at 1.68 kHz and observed essentially a constant green peak-power output, independent of duty cycle ranging from 30 to 100%.