A new generation of solid-state lasers

A radical rethink of solid-state-laser design is opening up growth applications in analytical instrumentation. Nicolas Féat of Oxxius explains how monolithic resonators are enabling a new class of sources with higher powers and improved stability.

Higher power, narrower linewidth and enhanced stability is a winning combination in many laser applications. Now, thanks to a patented monolithic resonator developed by engineers at Oxxius, France, a unique range of diode-pumped solid-state (DPSS) lasers is set to deliver against all three of these metrics, in turn providing an alternative to traditional gas lasers in the UV and visible. What's more, the compact design of the SLIM product family allows the lasers to be integrated into analytical instruments, opening up new applications in biophotonics and spectroscopy. 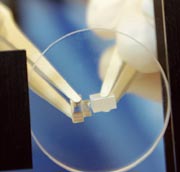 What sets the SLIM lasers apart is a proprietary, alignment-free monolithic-resonator (AMR) technology that sees the elements in the cavity assembled into a single ultra-low-loss optical subsystem. Using a process called optical contacting, contact forces (electron sharing, van der Waals') between the end-faces of two crystals create a bond that is extremely robust with time and temperature variations. Dielectric mirrors coated at the end-faces of the crystals complete the monolithic assembly with no moving parts.

With very little alignment required, it is then straightforward to embed the cavity assembly in a laser module. Passive filters in the resonator ensure emission stability, while crystal temperatures are controlled to match these filters to environmental conditions. The resulting lasers make up the SLIM platform with CW emission at 473 nm (up to 50 mW), 532 nm (up to 500 mW) and 561 nm (up to 200 mW).

A decade in the making

Solid-state laser technologies have been replacing gas lasers for more than a decade in a variety of applications (e.g. flow cytometry and confocal microscopy). GaAs laser diodes are widely used beyond 640 nm, 785 nm diodes have been used as Raman spectroscopy sources and 640 nm diodes as He-Ne laser replacements. More recently, reliable GaN products have extended their range from near-UV to blue emission (488 nm laser diodes have been available since 2008). Between 488 and 640 nm, frequency-doubled lasers are an ideal solution for integrators and researchers who wish to do away with the bulk and power consumption of gas-based systems.

In parallel, manufacturers have developed and improved their DPSS laser technologies. Starting with 532 nm, the product range has expanded to more exotic wavelengths, such as 561 or 594 nm, which are of great interest for bioanalysis applications. DPSS lasers are designed with a gain medium (Nd:YAG is the most common), a nonlinear crystal (e.g. KTP), beam-shaping optics and mirrors. Although several resonator designs can be used, these elements are typically glued or soldered to a ceramic base-plate and then thermalized to ensure a stable emission.