Lumileds redefines its shades of white

Philips Lumileds classifies its LEDs according to market needs. 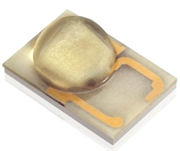 Rebirth of the cool white?

Following years of rapid technological progress, the US LED manufacturer is increasing its focus on customer needs. Philips Lumileds will drop the familiar "warm", "cool" and "neutral" terminology that refers to the colour temperature of its white emitters in favour of closely specified numerical values.

According to director of marketing communications Steve Landau, Lumileds has spent over a year addressing the issues facing luminaire manufacturers, architects and others in the lighting community more closely. Consequently, the company has now identified a confusing difference between what these terms mean to different people.

"We're trying to drive a real shift, a deeper understanding of what the market needs are," Landau said.

"What the lighting industry calls cool white is more like what we were calling neutral white. It's too abstract."

These specific temperatures have been chosen as most appropriate for applications that are already beginning to adopt LEDs into commonplace usage.

At the Lightfair show in New York earlier this month, the LED manufacturer conceded that solid-state lighting product development has been nearly exclusively technological since 2000.

Refining colour temperatures is part of Lumileds' deliberate strategy to now bring that technology more into line with what the lighting market needs.

Landau said that solid-state lighting was so dominant at this year's Lightfair it required a conscious effort to seek out alternatives.

Although this does not yet reflect the situation in important markets like illuminating ordinary homes, increasing uptake is giving cause for an optimistic outlook at Lumileds' San Jose facility.

"Business is good and the prospects are bright – no pun intended," Landau said.

• This article first appeared on our sister website compoundsemiconductor.net