UK photonics vendors get down to business

These are tough times for technology vendors, nowhere more so than in the UK. Over the past 12 months, Britain's manufacturing and banking sectors have taken an almighty clobbering. The outlook remains grim. According to the Economist Intelligence Unit, an economics consultancy, UK gross domestic product is forecast to contract by 3.8% in 2009 and a further 1.1% in 2010. What's more, analysts don't expect a sustained recovery in bank lending, the lifeblood of many small- and medium-sized enterprises, until 2011–12. 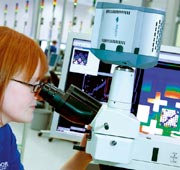 In spite of all of this economic carnage, it's evident that a number of UK-based optics companies are bucking the headline trend and making the best of the bad times. Here OLE talks to three of them about their strategies for navigating the downturn.

Commenting on the results at the time, Andor's chief executive officer Conor Walsh sounded bullish about the vendor's near-term outlook, noting that "many of the initiatives begun during 2008 [to deliver growth and improved profitability] are yet to deliver and this, together with a record order book, gives us confidence".

Those initiatives can be summed up in three operational priorities: diversification into new markets, technology innovation and cost reduction. What's more, Walsh and his team look to have got those priorities about right – the group's turnover for the six months ended 31 March 2009 came in at £16.1 m (up 40% on 1H 08). 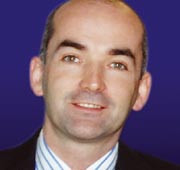 "We don't develop products for our own love of technology; we develop products where there is a clear market need," Walsh told OLE. "We are moving into new areas all the time but always off the core business of making scientific digital cameras."

Andor's technologies find applications in fields as diverse as drug discovery, toxicology, medical diagnostics and food-quality testing. The company has also pushed into the photovoltaic market for the first time this year, launching CCD cameras for fault inspection in solar cells and panels.

Walsh reckons that prospering in the downturn is all about prioritization and giving customers what they want. "Even in a recession, people don't stop spending money; they just get more discerning about how they spend it."

Ian Moyes, managing director of Artemis Optical, believes in keeping things simple. "When we first took ownership of the company in October 2008, we defined our mission statement as 'deliver the right product on the due date'. That still holds true for us today."

Although Artemis Optical is something of a new kid on the block (it's the result of a management buy-out of Qioptiq UK's coatings subsidiary), the company is in fact the latest incarnation of an optical coatings business that traces its origins back more than 50 years.

"The major reason that we bought the business was the gut feeling that if Qioptiq couldn't find anyone to sell it to, they would probably have closed it," explained Moyes. "I didn't feel that the employees deserved that. They worked hard and had done an exceptionally good job getting the company to where it was. It just wasn't growing quickly enough to satisfy the shareholders." 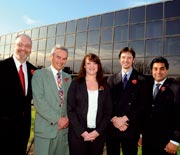 According to Moyes, the small-company dynamic has already had a positive impact, despite the wider economic woes. For starters, the management team is now exclusively based in Plymouth, which helps to streamline operational and strategic decision-making. A share ownership scheme is also expected to be rolled out to all employees, which the management team feels will deepen staff "ownership" of Artemis' performance.

At the business sharp end, Artemis specializes in the design and application of high-precision optical coatings from the UV up to the near-IR. With so many potential applications, Moyes reckons that the key is staying focused on the most profitable market niches. The Artemis customer base includes blue-chip OEMs in the defence, aerospace, security, laser surgery and analytical instrumentation markets.

"We try to develop a filter that has the design that will add the most value for our customers, but at the same time we want to do it as cost-effectively as possible so the customer will buy it," said Moyes.

Scitec Instruments is one of those small optics companies that's taking advantage of the global downturn to punch above its weight. After the formation of a new division based in Warsaw in 2007, Scitec Instruments Polska recently completed its first successful year of trading. "I thought that there was an opportunity with Poland joining the EU, and because of interest expressed from other UK optics companies in being represented out there," John Smith, founder and director of Scitec, told OLE.