US researchers are taking advantage of the unusual properties of Airy light to build a host of new optical tools. 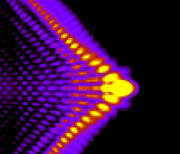 An Airy pulse in action

A team of researchers has found that sufficiently intense Airy pulses can ionize the surrounding air molecules and create curved filaments of plasma. According to the team, the bright white light given off by the plasma filaments could be used make remote spectroscopic measurements of the atmosphere and the bending effect itself could be exploited in new kinds of waveguides.

Airy light was first discovered in 2007 by Demetrios Christodoulides and colleagues at the University of Florida. They found that interference between individual laser pulses causes a more intense peak to veer off in one direction while other, less intense, peaks move in the opposite direction. Although the total momentum of the pulse travels in a straight line, its brightest part appears to follow a curved path.

Christodoulides and his colleagues have now teamed up with Pavel Polynkin and others at the University of Arizona to create curved filaments of plasma using Airy pulses. The key to their success, according to Jerome Kasparian of the University of Geneva, who was not part of the group, is their ability to – for the first time – create Airy pulses of extremely high intensity.

The team began with an intense infrared laser pulse that is about 35 fs in duration. The initially pancake-shaped pulse, which is symmetric around its direction of propagation, is then passed through a phase mask and then a lens, giving it a chevron shape with an intense peak at the vertex (see figure). This Airy pulse then travels about 1 m through air to a fluorescent screen where the light is detected.

Curved filaments As well as confirming that extremely intense Airy pulses appear to curve, the pulses also produced curved filaments of plasma by ionizing nearby molecules in the air.

Although physicists have long known that symmetric laser pulses can create such filaments, the process has proved very difficult to study. This is because symmetric laser pulses travel in the same direction as the white light given off by the plasmas they create, which means that any device that attempts to detect this light is dazzled or even destroyed by the pulse.

With Airy pulses, however, Polynkin, Christodoulides and colleagues discovered that the plasma light travels in straight lines tangentially to the curvature of the bright peak. The plasma light can therefore be detected – and perhaps even be used as a source of white light for spectroscopy.

Firing intense and long-range pulses into the air, for example, could allow researchers to make remote spectroscopic measurements of the atmosphere.

Polynkin also speculates that intense pulses could be fired into thunderclouds to create filaments that guide lightning to safe locations on the ground.

Studying the plasma light itself could even help physicists gain a better understanding of the complicated nonlinear optics that define how intense laser beams travel through air. These include the self-healing effect whereby the beam is continually refocused by the plasma – rather than being dispersed – allowing intense pulses to travel very long distances.

The team is now studying the creation of curved filaments in water rather than air.

• This article first appeared on our sister website physicsworld.com.