Japanese and French researchers are using evanescent waves to enhance the light output of LEDs.

An LED comprising V-shaped ridges instead of flat wafers offers 20-fold light extraction improvement claim a team of scientists from Japan and France. The researchers say that they have produced the first semiconductor structures to promise significant improvements in LED output by coupling evanescent waves (Applied Physics Letters 94 091102).

Evanescent waves are commonly produced during total internal reflection, a key limiting process to the extraction of light from the surface of optoelectronic devices to the air beyond.

The team extracted at least 50 percent of the light produced by a GaAs quantum well structure containing ridges where two evanescent waves can couple constructively.

"We believe that the evanescent wave coupling effect observed in our structure is completely novel," said Xue-Lun Wang of Japan's National Institute of Advanced Industrial Science and Technology (AIST).

Wang and colleagues produced their structures by MOCVD on a substrate that had been etched with ridges. When the team measured the samples' photoluminescence they obtained the 50 percent extraction efficiency figure, which they say is 20 times higher than for a conventional, flat substrate.

They determined the role played by evanescent waves by simulating the physical processes in action, independently supported by simulations performed at the Paris Institute of Nanosciences.

The greatest light extraction was seen when there was a 0.5 µm plateau between two V-shaped ridges, and rapidly diminished when this distance was increased. 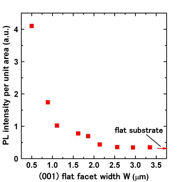 LED manufacturers are continually striving to improve extraction efficiency and reduce total internal reflection of light in their products as they try to enhance their overall luminous efficacy. Where this reflection does occur, the evanescent light waves that are produced decay rapidly as they move away from the reflection surface.

Wang told compoundsemiconductor.net that AIST is now using its approach to produce electrically-pumped LEDs, and that he believes these will be the first to exploit evanescent waves.

"We have surveyed almost all the existing light extraction strategies employed in LEDs," he said. "We couldn't find a device whose structure satisfies the conditions required for evanescent wave coupling to occur."

Faiz Rahman of the University of Glasgow, who is working on improvements to light extraction by nanoimprint lithography on the surface of LEDs, agrees that AIST's approach is novel.

"It seems to be based on sound principles and certainly appears an attractive way to enhance the brightness of LEDs," he said.

Rahman points out that texturing the substrate is a very different approach to patterning the top of the epitaxial structure - as is commonly performed by other LED researchers, including himself. "How this work will fare in the future will be decided by the ease of producing the grooved substrate."