The 42 m Extremely Large Telescope is one of the key priorities identified in Europe's newly unveiled 20 year astronomy roadmap. Jacqueline Hewett finds out how this decision was reached and the monumental challenges facing the scientists developing the massive mirror.

Making unanimous decisions by committee is always an arduous task. However, next time you find yourself in this situation, spare a thought for Michael Bode and his colleagues on the ASTRONET project who have spent the last three years compiling a roadmap that prioritizes both the ground- and space-based facilities that Europe should invest in over the next 20 years to ensure its leading position in astronomy. 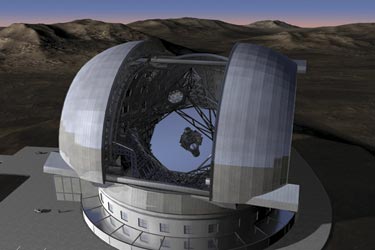 This massive task in diplomacy involved intensive interaction with the astronomy community. The end result is a comprehensive document that is backed by astronomers in 28 member and associated states across Europe.

"This project was very ambitious and the entire European astronomy community has had a chance to influence the decisions," Michael Bode, task leader for the ASTRONET roadmap, told OLE. "We now need to sustain the momentum and make sure that our recommendations get implemented."

One of two clear top priorities was the European Extremely Large Telescope (E-ELT), a 42 m diameter optical-infrared telescope being developed by the European Southern Observatory (ESO). The other is the Square Kilometer Array (SKA), a huge radio telescope (see box).

Guy Monnet, the E-ELT's international collaboration coordinator, believes that the ASTRONET endorsement was vital. "The funding agencies in the member states are essentially giving their support to E-ELT via ASTRONET," he told OLE. "It is these same agencies that will say yes or no to move the project forward. Not to be top-ranked at this stage would have been a disaster. ASTRONET was a crucial hurdle but we have many more to cross to build the E-ELT."