OPTITEC is a shining light of French photonics

The south of France is home to a thriving optics and photonics community. Belle Dumé talks to key players to find out the benefits of living and working in the land of light. 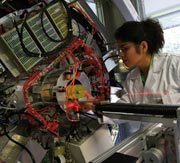 Located on the south-east coast of France, on the Mediterranean, the Provence-Alpes-Côte d'Azur (PACA) region surrounding Marseille is known as the land of light not only for its climate but also for the photonics cluster that calls the area home. The cluster is called OPTITEC, an active professional community which today has more than 170 members, including 106 companies and 40 research laboratories, all involved in industrial development, research and education in optics, photonics and image processing. 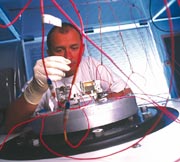 OPTITEC is governed by the not-for-profit organization POPsud, which was launched in 2000 by a regional network of companies and laboratories. The cluster plays a major role in building lasting bridges between academia and industry and more than 40 internationally recognized laboratories, such as the CNRS (the French National Science Agency), Institut Fresnel, Laboratoire d'Astrophysique de Marseille, Observatoire de la Côte d'Azur, INRIA, ONERA and the CEA (Commissariat à l'Energie Atomique), have an important presence.