As Barack Obama is sworn in as the 44th president of the United States of America on 20 January, all eyes will turn to the White House to see how the photonics industry and science in general will fare. John Marburger, director of the Office of Science and Technology Policy, describes the legacy that is being left by the Bush administration and what changes we can expect to see under the new leadership. 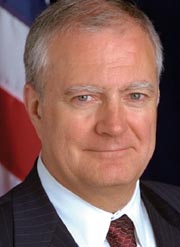 John Marburger is science adviser to President Bush and director of the Office of Science and Technology Policy. He has led a distinguished career in science, including previous appointments as director of Brookhaven National Laboratory and co-founder of the University of Southern California's Center for Laser Studies. On 20 January he will leave his position at the White House but will remain an active member of the science community.

What legacy is President Bush leaving for science?
Under President Bush, total R&D spending increased by 32% in inflation-adjusted dollars to its current level of $147 bn (€116 bn). Non-defence research has grown by 13% in real terms to $63 bn. Cumulative spending in biomedical research increased by 66% and in the National Science Foundation it has increased by 36% in real terms compared with the prior administration. Large investments occurred in energy, information technology programmes and nanotechnology.

Entirely new programmes were created in fields related to homeland security, including a new science agency at the Department of Homeland Security. NASA embarked on a new vision for space exploration, and the administration followed through on its commitment to complete the International Space Station, despite increased expenses and delays caused by the tragic crash of the Columbia spacecraft. President Bush led the US back into the international nuclear fusion project, ITER, and encouraged a renaissance in nuclear energy technology through new programmes in the Department of Energy.

The president also launched the American Competitiveness Initiative (ACI) in 2007, which was authorized and partially funded by Congress. This initiative aims to double budgets in key physical science agencies – precisely those agencies that support work in atomic, molecular and optical science.

Do you expect any changes to occur under the new leadership?
Science policies are very similar in all developed countries and differ little from one administration to the next. I expect little change in overall priorities. The impending recession will make it difficult for the next president to match the R&D record of the Bush administration, but much more troublesome in the long run is the runaway cost of mandatory health care and social security programmes. These are squeezing domestic discretionary budgets (which fund science in all fields) and are forcing difficult choices among equally important science programmes. I think the most important science policy task for the next president is controlling mandatory spending in the federal budget.

How do you expect investment in optical research to change?
Optical science has become an important "infrastructure science", like materials science or information science. It needs to be funded so as to support the many other fields that depend on it. For this reason the ACI was launched to increase investment in R&D, strengthen education and encourage entrepreneurship. Over 10 years, the ACI commits $50 bn to increase funding for research and $86 bn for R&D tax incentives.

With respect to optical scientists, funding is a priority and would be increased as the primary agencies that fund optical science are the ones that were targeted for budget doubling. For example, through the ACI, there are plans to double investment in innovation-enabling research at three key civilian federal science agencies – the National Science Foundation, the Department of Energy's Office of Science and the Department of Commerce's National Institute of Science and Technology laboratory research and facilities.

If the new leadership follows through on the ACI, which received bipartisan support in Congress but remains only partially funded, then optical science will benefit. Defence, biomedicine and energy technology will always be important components of US R&D.

To what extent do you think the current economic climate will affect how much the new president will invest in science?
If the new leadership in Congress and the White House launches an economic stimulus programme, I hope very much that it includes a science research component. This will be essential to ensure the long-term strength of the economy.

We have already lost three years in rebuilding the infrastructure of physical science by not fully funding the president's requests for ACI. If there is not a science stimulus component, then the new president will have to work hard to prioritize funding for those components of science most important for the future economy. Optical science would certainly benefit from such priorities.