The optics of cylindrical lenses allow their use in applications for which spherical lenses are not suited. CVI Melles Griot has developed the technology for use in several markets.

Cylindrical lenses have a spherical radius in one axis only, and so magnify in just one direction. They will transform a point image into a line image, or change the height of an image without altering its width (figure 1).

Cylindrical lens surfaces are required in a variety of applications including barcode scanning, holography, optical information processing and computing, laser projection, slit and line detector array illumination, and cinemascope anamorphic lenses. Some of these applications will be discussed later. 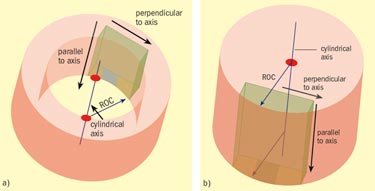 Although cylindrical lenses share some common traits with conventional spherical lenses, the spherical symmetry in the latter makes them easier to describe, manufacture and test. The fabrication and measurement of cylindrical optics poses some unique challenges.

Lens manufacture
Cylindrical lenses are typically manufactured from a rectangular convex cylinder. The manner in which the cylinder is mounted or "blocked" for fabrication of a cylindrical lens will be dictated predominantly by the radius of curvature (ROC) and the dimension parallel to the cylindrical axis. There are two main types of cylindrical blocking: 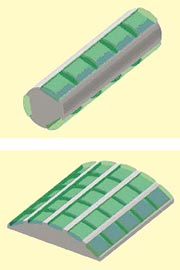 In either case, once the tool has been determined it is critical to mount the substrate to the tool very carefully otherwise the opto-mechanical specification is at risk.

One of the last operations in the fabrication of spherical lenses is ensuring that the lens is accurately centered with respect to the optical axis. Post-centering of cylindrical surfaces is more complex, because they lack the spherical symmetry and their optical axis is a plane rather than a line.

Theoretically, centering error in the direction perpendicular to the cylindrical axis can be compensated for by edging the lens down. However, correcting the wedge in the parallel direction would require re-surfacing the back plano surface.

In practice, the opto-mechanical specification is effectively a process-controlled parameter for the majority of cylindrical optics. When blocking the substrate, care must be taken to reference the cylindrical axis. The same blocks holding the work pieces for milling must also be used when smoothing and polishing, to ensure that the tools are directed parallel to the lens surface, and the smoothing and polishing tools must be parallel and curved to the desired shape.

Surface shape
Two important parameters in defining the surface of a cylindrical lens are the ROC and the surface figure. The ROC can be validated in a similar manner to that used for spherical lenses, although the asymmetry of cylinder lenses means that the spherometers and interferometers used with spherical lenses must be modified.

For a cylindrical surface, only the power in the direction perpendicular to the cylindrical axis is generally specified. The remaining surface form error, including the unwanted power in the parallel direction, is called the surface figure. It is usually specified in units of wavelengths and quoted separately along the parallel and perpendicular directions.

If these test plates are cylindrical, a full map of the cylindrical surface under test can be obtained. If spherical and flat test plates are employed instead, the interference fringes appear over a narrow line profile of the surface. When using a spherical test plate, this profile is oriented along the surface in the direction perpendicular to the cylindrical axis, while employing a flat reference orients the line profile along the parallel direction. If the two surfaces have the same radius and are regular, then the fringes seen are straight and parallel to the contact line, as shown in figure 5. By measuring several profiles in each direction over the surface, any surface irregularity and variation in the radius of curvature can be evaluated.

For quality control of finished components, the use of laser-based interferometers has become common practice. These instruments use coherent optical interference to map the surfaces of components, allowing extremely precise, quantitative measurements. But again, because of the special asymmetry of the cylinder lens, a precise measurement method has to be adapted.

At CVI Melles Griot, we use computer-generated holograms (CGH) along with a Zygo GPI interferometer to carry out 100% inspection of the final parts. The test plates are also tested interferometrically, which ensures high quality control in the manufacturing process.

Using a CGH in transmission in front of the interferometer generates an accurate cylindrical test wavefront that matches the curvature of the surface under test, and thus gives a precise measurement of the surface figure over the entire cylindrical surface. Precision of up to λ/10 PV can be achieved.

We also use interferometry to measure the cylindrical ROC, with either a CGH or a transmission sphere (TS). Figures 5 and 6 show the fringe patterns at the confocal position for these two set-ups.

Because cylinders are inherently more difficult to fabricate than flat and spherical optics, it has long been difficult to manufacture good interferometric references that would help in manufacturing better cylinders. Obtaining precise, accurate and repeatable metrology is essential for guaranteeing high-quality components.

Polishing methods
There are two predominant methods of polishing. The first method is the rotary method, where a cylinder rod is rotated about its axis. Barrel blocks with short radius convex cylinders mounted on them are polished in this manner. Concave lenses can also be surfaced this way when mounted on a plate block with a rotating polishing tool.

The second method is the Strasbaugh or linear method, working with plate blocks of lenses. This can be seen as a variation of the equivalent process used for making spherical optics, where an axis of the lap is constantly maintained in parallel with the axis of the cylinder surface.

Selecting between these two main polishing methods depends on various specifications of the part, such as required surface figure, edge dimensions and the ROC.

There are, however, a number of alternative methods being developed that integrate computer technology with radically different polishing methods. These include computer-controlled polishing or magnetorheological finishing techniques. Such techniques allow improved product performance, especially with regard to the surface figure of the lens, but they are generally too expensive for most applications.

Surface quality and roughness
Two final specifications of interest are the cosmetic surface quality, which describes the level of defects visually detected on the optical surface and the surface roughness. Both of these parameters are the same as for spherical components.

Surface quality becomes critically important in high-energy laser applications, or where scatter must be reduced in order to improve the signal-to-noise performance. Our method at CVI Melles Griot is to carry out 100% inspection of all surfaces, cleaning and examining them at all four stages of the production process. Our standard cylindrical optics meet a scratch-dig performance of 20-10, and the polishing processes ensure low surface roughness values. On such high-quality surfaces, CVI Melles Griot will deposit ultrahard coatings and guarantee high laser damage thresholds.

Cylindrical lenses can be used in a variety of applications areas. In laser diode collimation, the divergent astigmatic beam of a diode laser can easily be collimated by using a pair of cylindrical lenses placed perpendicular to each other. The lens closer to the laser collimates the fast axis, while the second lens collimates the slow axis of the laser diode. Using two distinct lenses in this way also permits complete removal of the astigmatism inherent in laser diodes.

Another growing market is anamorphic lenses, first developed in the film industry, which deliberately distort an image to allow standard 35 mm films to record images in widescreen format.

One new application is the use of an anamorphic lens to enable 16:9 aspect ratio digital projectors to create full-screen 2.35:1 (Cinemascope) images, for display on super-wide format home-theatre screens.

In a 16:9 screen format the image width is 1.78× its height. So when a 16:9 projector with a conventional lens projects 2.35:1 images, these images have to be squeezed down to fit into the smaller 16:9 frame, leaving black bars above and below the image. This diminishes both the projector's ultimate performance (in resolution and brightness) and the true immersive experience this 2.35:1 format represents.

The solution is to first electronically stretch the image in the vertical direction, so as to use all of the pixels from the 16:9 projector. If this was displayed with a normal lens, the image would fill a full 16:9 screen, but would look vertically stretched. In effect, figures would look excessively tall and skinny. By affixing an anamorphic lens to the projector in front of its standard lens, the image is returned to its original aspect ratio and appears optically undistorted, while also achieving higher resolution and brightness.

There are two types of anamorphic lenses on the market for such applications. One compresses the image vertically and the other stretches it horizontally. The second type creates an image that has the same height as the original 16:9 image, but is also 33% wider. Note that such add-on anamorphic lens do not manipulate in any way the image in the complimentary dimension to the one anamorphosed, whether vertically stretched or horizontally squeezed

It should also be noted that although using cylindrical lenses or prisms are the two main approaches used to anamorphose an image, some alternative approaches using hybrid cylindrical/prism designs have also been developed.

Manufacturing of cylindrical lenses is not a simple task. Only a few manufacturers, with the best control equipment, can measure and guarantee the quality of cylindrical optics. It is therefore highly recommended that you check with your supplier to ensure that the quality control tools meet your requirements. At CVI Melles Griot, we pride ourselves in the largest range of high-precision cylindrical lenses on the market.