OLEDs seek a home in the lighting market

OLED materials are being developed for solid-state lighting. Michelle Bryner of market analyst NanoMarkets sizes up the potential opportunity for materials and lighting firms. 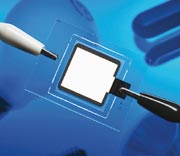 Lighting manufacturers are constantly looking for ways to distinguish themselves in an industry comprised of lightbulbs and fluorescent tubes that sell mostly on price. Potential differentiators might include the initial price paid, but for conventional products these are now so low that it is unlikely that any new technology could offer an improvement. With this in mind, lighting producers are seeking other ways to stand out in the marketplace mostly through improved aesthetics, energy efficiency and improved lifetimes.

One such technology that could offer these distinct characteristics is organic light-emitting diodes (OLEDs). According to a report recently published by NanoMarkets, OLED Lighting Markets 2008, the OLED lighting market will grow from about $2.8 m this year to around $6 bn in 2015 (see figure 1). This article will discuss how NanoMarkets expects OLED technology to penetrate the lighting industry.

OLEDs come of age
The initial development work in OLEDs, first discussed in the technical literature of the 1970s, focused on flat-panel display (FPD) applications, and the great promise of the technology motivated many collaborations across academia, governments and multiple industries throughout the 1980s and 1990s.

But things have not worked out this way. The power consumption and video quality advantages of OLEDs over LCDs are not as obvious as once hoped. LCD technology keeps improving, which makes the performance requirements for OLEDs a moving target. Creating OLEDs on large substrates has proved to be a serious manufacturing challenge, and designing complex active backplanes for OLED displays has also been a source of endless frustration.

All of this has driven OLED makers to seek new opportunities in the lighting sector. Much of the FPD-oriented R&D has been directly applicable to lighting, including work in materials, structures and manufacturing. Lighting seems to present opportunities that are both simpler technically than displays and where the entrenched technologies, such as lightbulbs and fluorescent tubes, seem easier to push aside than the entrenched technology in displays, the LCD. As a further benefit, there is often significant government funding for R&D into lighting. OLED lighting has received substantial public sector support in both Europe and the US.

The age of OLED lighting is not yet upon us, but the trail to solid-state lighting is already being blazed by other technologies such as inorganic light-emitting diodes (ILEDs). That fact will be a mixed blessing, helping to accelerate the acceptance of OLED lighting, while simultaneously posing as a rival technology. Most believe that ILEDs and OLEDs will be complementary in some lighting environments and competitive in others.

In addition, OLEDs can, in theory, be fabricated as large flexible panels that can provide aesthetic appeal for architectural and vehicular lighting and perhaps general illumination. This would be hard to duplicate with ILEDs. Other advantages of OLED lighting that ILEDs would find hard to match are its profile, weight, power efficiency and aesthetics.

There has been tremendous progress in all aspects of OLED lighting over the past five years including materials, architectures and manufacturing processes. The industry consensus is that OLEDs have reached the point where they are now adequate for niche lighting applications. In the long-term, as their core capabilities improve, they will ultimately become contenders for mainstream applications that require an area, rather than a point, source of light. Applications where OLED lighting could play a role include backlighting, general-purpose illumination, architectural and specialized industrial lighting, vehicular lighting, and signage.

Most development activity is being targeted at the 1000-nit brightness level, generally considered to be the entry point for general-purpose lighting (an attractive opportunity for OLED lighting simply because the addressable market is so large). About 24 billion light bulbs for general illumination are sold worldwide every year.

But while the demand for lighting will increase as development proceeds in Asia, Africa and Latin America, it also seems likely that fewer bulbs, tubes and lighting arrays will be bought, simply because these lighting products are achieving longer lifetimes. As a result, NanoMarkets expects the addressable market to fall to about 10 billion units by the end of the forecast period. This represents OLED lighting sales for the general-purpose lighting market of about $1.1 m in 2008, growing to almost $2.3 bn in 2015.

NanoMarkets also expects OLED sales for the backlighting market to grow from close to nothing this year, to $1.1 bn in 2015 (see figure 2), while architectural and specialized industrial lighting applications will grow from about $1 m this year, to around $1.9 bn in 2015.

Materials game
There are three key points that describe the strategic landscape for the OLED industry. First, while the performance of individual materials is important, the device efficiency and cost must be considered by looking at everything used in the OLED stack as a whole. The relationships between the individual materials are complex and intertwined. Making a small change to one layer can have a profound effect on the overall performance of the device. It is not enough to find one killer material, it does not exist in isolation.

Second, the fabrication of the stack must be considered. Depositing a layer of material may have detrimental effects on one or more of the existing layers. Solvents, heat and other processing factors may also have undesired effects. Complex procedures developed in a laboratory may not transfer easily to a commercial production setting.

Finally, there is the question of the IP related to the various OLED materials. A tangled web of patents, licence agreements and partnerships creates a minefield for those developing new materials. Some smaller companies have based their business model on patent royalties. Some larger companies, as well as smaller companies looking to grow, hold onto their IP to give them a competitive edge. And companies of all sizes find that it is useful or essential to establish partnerships and joint ventures.

The fundamental fact is that the OLED materials market remains in a state of flux, with steady progress being made toward better materials and ways to apply them to create OLED devices for displays and lighting. We are still short of a situation where manufacturers can simply perform a turnkey operation and begin producing OLEDs.

A fork in the road has started to emerge, which will have implications for OLED manufacturers. Some companies are developing individual materials designed to perform different functions in an OLED stack. Often these are part of a family of products, each of which has been tuned for slightly different performance attributes. In general, it is up to the manufacturer to obtain development quantities of these materials and perform its own experiments (often using materials from various sources) to develop an OLED device stack that performs to its specifications.

Another approach is emerging, as exemplified by DuPont's intentions. The company plans to develop a complete package of materials, processes and production equipment. This will certainly simplify the decision process for OLED manufacturers, but adds some risk in terms of becoming locked into a single source for materials and device design.

Both the à la carte and complete solutions approaches have their advantages and disadvantages. The separate material approach is likely to be favoured by larger companies that can afford to fund extensive research and development. This will enable them to come up with solutions that may be optimized for their specific needs and that can provide a competitive advantage over other OLED manufacturers.

On the other hand, small companies may prefer the turnkey option. It will allow them to get into the game without having to invest time and money creating their own solutions. This is likely to appeal to companies that want to compete in markets where OLEDs are in high volume demand and product manufacturers will want multiple sources at competitive prices, such as mobile-phone displays and lighting devices. 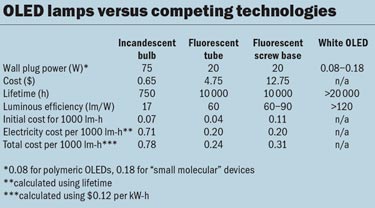 The substantially higher efficiencies and longer lifetimes promised by ILEDs and OLEDs over conventional lighting technologies (see table 1) represent a winning proposition in general-purpose lighting. For residential lighting, there are strong forces in play by local, regional, national and continental interests to wean consumers away from incandescent technology and toward more efficient fluorescent bulbs. The fact that compact fluorescent (CFL) bulbs are typically compatible with existing incandescent sockets is helping in that transition.

In industrial and some commercial lighting, ILEDs are having an impact and are likely to become firmly entrenched. Accent lighting and other architectural types of lighting could provide a safe haven for OLEDs in the near-term. Here, the fact that OLEDs lag behind the more mature ILED technology in characteristics such as efficiency and lifetime is less important than the design possibilities provided by a planar sheet of light. Flexible OLED lighting will have a special appeal in this arena, bringing all of the design freedom that comes with conformal lamps that curve to mate with irregular surfaces.

The bottom line is that incandescent is, and fluorescent may be, destined for the scrapheap of lighting history, with halogen and others also going the way of the dinosaur. In the short-term, fluorescent should enjoy a healthy surge in residential installations, as better-educated consumers adopt its more energy-efficient technology. The CFLs built with standard incandescent light bulb bases provide a particularly easy transition model, although the built-in ballasts do not fit some lamps and fixtures. Long-term, though, lighting belongs to solid-state sources, first ILEDs alone and then in tandem with OLEDs.