A new LIDAR system mounted on a wind turbine measures wind speed and direction hundreds of metres away. 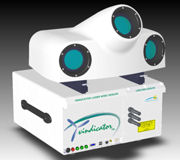 Catch the Wind has developed a LIDAR system called the Vindicator, that could measure the wind speed and direction up to 1000 metres in front of a wind turbine. This allows enough time for the blades to orientate themselves correctly, which will boost the turbine's efficiency and lifetime.

"The Vindicator system is a new breakthrough for advance measurement from a turbine-mounted sensor," Bill Fetzer of Catch the Wind told optics.org. "It uses three eye-safe low-power beams to measure the speed and direction of particulates in the moving airflow in three dimensions."

The system is comprised of a fibre-optic laser module, processor, control system interface, and a remote lens assembly. The laser module and processor are housed in a separate assembly that may be located either within the wind turbine nacelle, or with the remote lens assembly. The first production variant of the Vindicator system will sense the wind at a distance of 300 meters, although Catch the Wind expects that ranges of up to 1 km will be achieved as the technology is utilized by the industry and developed further.

Conventional LIDAR usually relies on mirrors to project a single beam outwards as a cone. As well as lacking the ability to sense air flow in three dimensions, the mirrors in such systems are easily knocked out of alignment by the harsh conditions or sudden changes in temperature experienced by a working wind turbine.

"We have used optical fibres rather than mirrors in our system," explained Fetzer. "The most significant challenge was to develop a fibre-optic laser system that can withstand the range of extreme temperature environments that wind turbines can experience, from desert conditions to arctic weather." That fibre-optic system could also be retrofitted into turbines already in operation.

In the past, wind sensors mounted on the turbines themselves have usually been simple anemometers placed on the rear of the nacelle. They measure the wind speed only after it has passed through the blades, which is of no use in blade orientation and may not provide an accurate reading. Wind turbines are claimed to lose 1% of their operating efficiency for every degree that their blades are out of alignment with the oncoming wind.

LIDAR's primary use in this market has been to determine if a location is suitable for a wind farm, but Catch the Wind believes that its three-beam LIDAR device would have advantages for this initial decision too. "A Wind Resource Assessment model of the system can reduce the need for erecting meteorological towers to gather wind data at potential on-shore and off-shore wind sites," noted Fetzer.

The Vindicator is currently being field-tested in Canada, with commercial production scheduled to begin in late 2010.