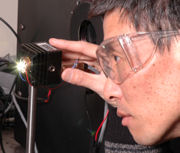 The commercialization of solid-state lighting based on LEDs could be aided by a new test procedure under development at the US National Institute for Standards and Technology (NIST) in Gaithersburg. NIST scientists Yuqin Zong and Yoshi Ohno say that their new method will help close the gap between LED manufacturers and the lighting industry, by providing a test for LED brightness and colour that is directly comparable with conventional lamp measurements.

Currently, LED makers and the lighting industry are poles apart in their approaches to metrology, and this lack of a common method has hindered the commercial uptake of solid-state lighting. The main difficulty is that the light produced by an LED depends on its operating temperature and, more specifically, the junction temperature in the semiconductor.

To help ensure speedy device production, LED manufacturers use a test based on high-speed optical pulses to check the colour and brightness of their devices. However, these 20 ms pulses do not give sufficient time for the chips to warm up to what could be "normal" operation, where junction temperatures might reach 60°C. Since LED output is temperature-dependent, actual operating characteristics can differ from those quoted under the manufacturers' test conditions.

Unlike LED makers, the wider lighting industry tends to use a steady-state DC approach to lamp metrology, and these potential users of LED chips would prefer that the devices are characterized in the same way.

According to the NIST team, the lighting industry is already taking note in their new approach. "Osram Sylvania has expressed interest, and the method has already been adopted as the standard in Taiwan," they said. In their paper, presented at the 2008 Expert Symposium on Advances in Photometry and Colorimetry, Ohno and Zong state: "We have developed a new, practical method for measurement of high-power LEDs at any specified junction temperature."

The new test method is based around a temperature-controlled heat sink, which sets the LED chip to any specified junction temperature prior to DC testing of device output. These heat sinks are cheap and widely available, and the team says that its method is compatible with all types of high-power LEDs, including arrays of emitters connected in series.

So far, Ohno and Zong have applied their DC method to a 1 W phosphor-based white LED set at a junction temperature of 25°C, and compared it with a 20 ms optical pulse test.

As it turned out, this preliminary effort showed that there was hardly any difference between the results obtained using their new DC method and the normal pulse-test approach. Further experiments are now under way to further validate the method, but the early suggestion is that, if adopted, the test could help to close the gap between LED makers and the wider lighting industry.

The new test could also prove useful to LED chip designers, since it can determine the thermal resistance between the semiconductor junction and surface of the heat sink and relate this to optical output characteristics.

Armed with this information, designers of solid-state luminaires ought to be able to optimize their thermal management systems to produce more efficient lamps.