A simpler route to invisibility 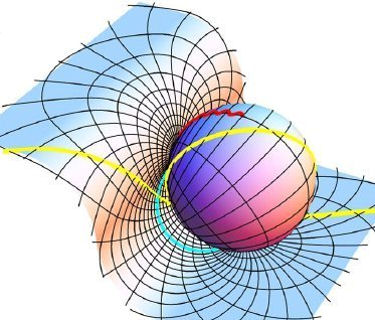 Two years ago researchers at Duke University in the US unveiled the first "invisibility cloak" — a device that can make objects vanish from sight, at least when viewed using a narrow band of microwave frequencies. Such cloaks work by causing electromagnetic waves to flow smoothly around the object and recombine on the other side in such a way as to make it appear that the waves travelled straight through the object unhindered.

Since then physicists have struggled to create cloaks that work across a wider range of frequencies and could be used, for example, to hide an object from radar. Now, Ulf Leonhardt of St Andrew's University in the UK and Tomás Tyc of Masaryk University in the Czech Republic have come up with a new way of using mathematics to describe a invisibility cloak — a breakthrough that the physicists say could lead to the development of broadband invisibility cloaks (Science DOI: 10.1126/science.1166332).

From a mathematical point of view, an invisibility cloak can be described as a transformation of flat space that makes the light follow a curved path around the object. The idea is to make a coordinate transformation that takes a point in space and expands it into a sphere, the interior of which is invisible to an observer on the outside. For this to work light must traverse the surface of the sphere in the same, infinitesimally short time it would take to pass the original point. As a result, the light must travel at an infinitely high speed on the surface of the sphere.

Amazingly, the phase velocity of light can approach infinity in some materials and metamaterials (without violating the special theory of relativity because the "signal velocity" remains the speed of light). This has allowed the Duke team and others to actually build invisibility cloaks. The problem, however, is this only occurs for light at certain resonant frequencies.

However, because of the way that the plane intersects the sphere, there is a small region on the sphere that these curved paths don't cross. The trick, according to Leonhardt and Tyc, is to use a coordinate transformation to expand this into a space that could enclose a cloaked object. Because this does not involve expanding an infinitesimally small point, it does not require the light to travel at an infinitely high speed. This means that the operation of the cloak is no longer dependent on resonances in the material and should therefore work over a wider range of frequencies

While the physicists haven't actually built such a cloak, they say that there non-Euclidean approach could provide a blueprint for building a broadband cloak. In particular, it could be used to define the index of refraction at a specific point in the cloak — and for light travelling in a specific direction. This quantity is given by the ratio by which the transformation stretches space at that point to create the cloaked region.

Of course, it will be a challenge to actually engineer a material to have an index of refraction that varies just so, but Leonhardt told physicsworld.com "I'm sure it can be done, technical challenges certainly need to be overcome, but no longer principal problems."