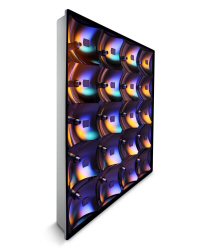 The Mountain View, California, company has improved its tracker system efficiency from 18 to 25%.

The improved systems will be used in the largest European concentrator photovoltaic (CPV) deployment to date, the previously announced 10 MW deal with EMPE Solar, which is targeted for completion in 2010.

With SolFocus' previous technology rated at 6.15 kW output per tracker, the improvement should mean the latest 1100S trackers generate in excess of 8.5 kW.

The company's vice-president of marketing, Nancy Hartsoch, told compoundsemiconductor.net that the improvement exclusively derives from a major redesign of the systems' optics. Judging by images of the old and new panels, one part of this is changing from hexagonal to square reflector units.

Consequently, the 1100S systems are poised to pull further clear of silicon rivals when GaAs-based triple-junction cell manufacturers next improve their products’ efficiencies.

The CPV system maker is intending its 1100S production ramp to hit high volume in late 2009.

Hartsoch says that the EMPE Solar deal is early evidence of a high level of interest in SolFocus' module's industry-leading performance.

“Customers are excited about the system, as with this efficiency the energy generation is very high,” she said.

Currently EMPE Solar is still finalizing the exact locations where it will deploy the 1100S systems, with the choice due to be made next month.

While the company's name is unfamiliar to most, Hartsoch says that EMPE Solar's partners were responsible for the first thin film photovoltaic power plant in Spain. “They do, however, stay pretty much below the radar,” she added.

This article originally appeared on our sister website compoundsemiconductor.net