Breaking the 100 as barrier and making the first movie of electron motion are just two recent milestones achieved by European researchers. Nadya Anscombe talks to key players in the attosecond community to see what the future holds.

When taking photographs of fast-moving objects you need a camera with a fast shutter speed. The same is true when monitoring the movement of atoms, molecules and electrons. Most molecular dynamics can be observed in real time using femtosecond technology, but for electron motion this is not fast enough. The time for a single revolution of an electron in the simplest atom, the hydrogen atom, is 152 as and in order to observe this in real time, researchers need a camera with a shutter speed on this atomic timescale. 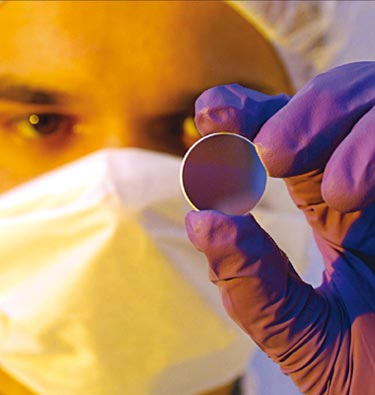 Scientists all over the world have for many years been trying to build a camera that works on this timescale. Being able to see electronic motion in real time would open up a whole new field of science and would revolutionize the way that we see the world. Just a few years ago, scientists could only dream of such a technology, but today, the impossible has become reality. 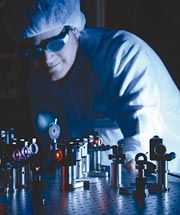 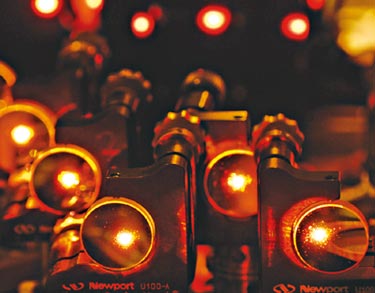 One reason why Europe is so strong in this field is that several years ago attosecond science networks were funded under the European Commission's 5th and 6th Framework programmes. The first such network was led by Anne L'Huillier from Lund University, Sweden.

Her group has this year used attosecond pulses to record the motion of an electron in a laser field (you can see the film at www.atto.fysik.lth.se). They used an attosecond quantum stroboscope to make a movie that represents how an electron rides on a lightwave after just having been pulled away from an atom. This is the first time that an electron has ever been filmed and it will help physicists verify their theoretical calculations. With a more intense laser, these scientists have also succeeded in guiding the motion of the electron so that it recollides with its parent ion. "We have long been promising the research community that we will be able to use attosecond pulses to film electron motion. Now that we have succeeded, we can study how electrons behave when they collide with various objects," explained Johan Mauritsson, assistant professor at Lund. 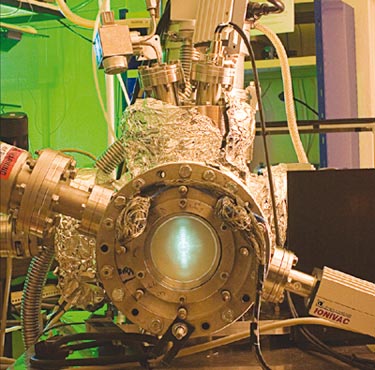 The group also hopes to find out more about what happens when an inner electron is ionized, for instance how and when the other electrons fill in the gap that has been created. 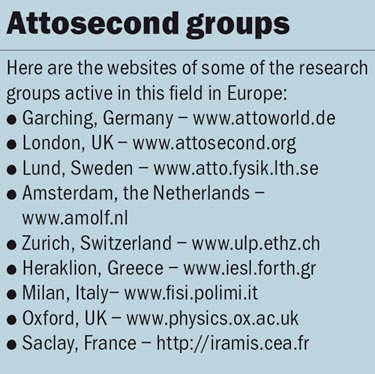 "A stroboscope enables us to 'freeze' a periodic movement, like capturing a hummingbird flapping its wings. You then take several pictures when the wings are in the same position, such as at the top, and the picture will turn out clear, despite the rapid motion," explained Mauritsson.

The electron in the film behaves as predicted by theoretical calculations, but that is to be expected for an outer shell electron from argon or helium. The attosecond stroboscope, or more generally attosecond spectroscopy, will really show their worth when applied to more complicated systems, for example, molecules. This is where theoretical calculations become hugely complex and physicists need a tool that can help them visualize electron behaviour.

In collaboration with groups from the Netherlands, Germany and Italy, her group is working on more advanced attosecond imaging techniques. It is this sort of collaborative work that L'Huillier believes is essential to the advancement of attosecond science in Europe. But she believes that the future of these collaborative networks is in jeopardy as a recent proposal failed to receive funding from the European Commission. "Europe is making a big mistake by not funding a collaborative network in attosecond science," said L'Huillier. "Competition in this field is high and if we want to stay ahead of the competition, we need funding. I am not complaining about funding in general – many individual groups have excellent funding – but that little extra is essential as it helps us to form networks and enables us to meet on a regular basis. This is what has given us the head-start in this field and it would be a big mistake to lose this momentum."

Ferenc Krausz agrees that the early networks were important. His group at the Max-Planck Institute of Quantum Optics in Garching and Ludwig-Maximilians-University of Munich, Germany holds the record for the shortest ever laser pulse (80 as). "These coordinated activities provided a lot of synergies and helped proliferation of the new technologies all over Europe. Thanks to these initiatives, there are now more than a dozen European laboratories that are active in this area and making important contributions to its advancement," he said.

Krausz believes that the breaking of the 100 as barrier will lead to new insights into electron processes and the development of new light sources, exploration of the microscopic origin of serious illnesses, or gradual advancement of electronic data-processing towards the ultimate limits of electronics.

It is the movement of electrons that is responsible for chemical reactions, so being able to monitor electrons in real-time will have an effect on all areas of life. For example, they are also responsible for deformation and resulting malfunctioning of biomolecules, or transmission of biological information in the nerves. This is why he believes that attosecond science can be used to investigate the origin of cancer.

Spectroscopy on surfaces
His group also recently performed attosecond spectroscopy on condensed matter systems for the first time. "We got very excited about the possibility of performing attosecond measurements in condensed-matter systems. Encouraged by this finding, we have been making great efforts to set up an entirely new ultrahigh vacuum attosecond beamline, which is dedicated to attosecond measurements in solids and on surfaces," said Krausz. "There is a vast range of hyperfast electron processes occuring in these environments and relevant to future technologies. These include the development of new electronics based on plasmonics; more efficient solar cells in photovoltaics; and molecular electronics and bioinformatics. With the new ultrahigh vacuum attosecond infrastructure we plan to address these and other intriguing projects in collaboration with other groups from Germany and abroad."

He believes that the toolbox of attosecond technology, including intense few-femtosecond laser pulse pulses, attosecond XUV/X-ray pulses, diagnostic tools, spectroscopic and measurement techniques, need to be continuously extended and married with other technologies.

But as well as advancing research in attosecond science, it is also important to make this technology more accessible to those that want to use it. "We have to make this technology more reliable and more user-friendly to expedite its proliferation," said Krausz. "There are a large number of groups who are interested in using it but are prevented from getting into it due to the complexity of the technology."

John Tisch, from Imperial College London, UK, also believes that this is an important next step in attosecond science. "I think that we are in a similar position to that of femtosecond lasers 15–20 years ago," he explained. "Femtosecond lasers used to be complicated pieces of equipment that needed several experienced researchers to operate them. Today, they are the size of a shoe box and much simpler to use."

He points out that the development of femtosecond lasers enabled the field of femtochemistry that ultimately led to a Nobel Prize in Chemistry for Ahmed Zewail in 1999. "This is how I would measure the success of attosecond science," said Tisch. "It is all about how well it will transfer into other areas of science and what exiting applications it can be used for in the future."

Tisch would like to see attosecond technology used not only to watch electronic motion but also to control it. "At the moment our work is like that of a movie cameraman, recording the movements of the electrons. One day, we would like to become like movie directors, making the electrons move where we want. If we could do this, we could control chemical reactions, design new materials and create faster, more efficient electronic devices," he said.