The saying "look before you leap" applies to any optics business thinking of establishing a presence in China. Jacqueline Hewett speaks to Richard Farmer of ATG Airports and Richard Freeman of Zeeko about their first-hand experiences of China's optics industry.

This summer's Olympic Games in Beijing gave the world a snapshot of China's booming economy as well as its cultural heritage. But when it comes to doing business in and with this fast-moving nation, the general consensus is that a trip to China is essential to pick up first-hand experience. Simply relying on gut impressions is not enough. 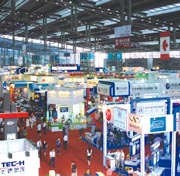 "You have to go to China to find out what it is like," Richard Freeman, managing director of UK-based corrective polishing specialist Zeeko, told OLE. "The rate of industrial expansion has been incredibly impressive. Unless you have been to China recently you have no idea what all the fuss is about. There is nothing about Chinese cities that would cause you to say that they are a developing nation. They have all the hallmarks of a fully industrialized country."

"Anyone wanting to trade in China should visit the country," Farmer explained. "I think that there is always concern and doubt over what they can and can't do. With a safety-critical product or something that is subjected to performance standards, this has to be passed on to the supplier. In our case, it was crucial to go and see what the companies can do."

On a mission to China
Making your mind up to visit China is an easy decision, working out the logistics is another matter entirely. Both Farmer and Freeman recently participated in an eight-day trade mission to China organized and led by the UK's Photonics Knowledge Transfer Network and UK Trade & Investment.

The first stop on the mission was Chongqing, a significant industrial area and fast-growing metropolis in Western China, which lies about a 2.5 hour flight away from Beijing. The next stop was Shenzhen and a visit to the China International Optoelectronic Exposition (CIOE). This was the exhibition's 10th anniversary and organizers predicted that 85,000 visitors would attend over a four-day period.

The Chongqing leg of the mission involved site visits to local companies where Farmer, on his first trip to China, made some interesting observations. "The companies that I visited were all organized, had quality procedures in place and were all making a bona fide product," he said. "The downside was the lack of product variation in the companies. There were a lot of companies, all of which seemed to be making and selling the same type of products."

Moving on to Shenzhen and the CIOE exhibition, both Farmer and Freeman agree that while CIOE was well organized and a good place to network and establish relationships, it was not quite as they imagined it to be.

"A lot of the manufacturers were from the local Shenzhen area," commented Farmer. "It was more of a Shenzhen exhibition than a China exhibition. We look at China as one big country but they have much more of a local identity. They look to sell products between regions for example."

Freeman was keen to emphasize another point. "In the UK, we have one city that has a population of over one million," he said. "But in China, there are over 200 cities with over one million people. It hammers home that you should go to China if you are thinking of doing business there. In many ways, you can't do your job unless you have been there."

Shenzhen is very much an up-and-coming area, which may also cause some concern. "It could be a challenge to maintain a consistent relationship," said Farmer. "You got the impression that there was quite a turnover of people. There is tremendous competition in Shenzhen with lots of people flooding in. I would be interested to see if the people that I spoke to at the exhibition will be there in six months. This could mean that there are a lot of new ideas, but it might not be so good for consistency."

The future looks bright for both ATG Airports and Zeeko in China. Farmer believes that he has established good initial contacts that will turn into fruitful business relationships while Freeman has done some groundwork for Zeeko's planned expansion into China.

"I returned from the visit with total orders exceeding half a million pounds," said Freeman. "In the past we have sold our machines in China through agents but now we are big enough to go it alone. I hope that we will have offices open in China by the end of 2009. You can't possibly be in the business of making corrective polishing machines for making optics and not have China as an important part of your future."