A high-speed fluorescence imaging technique is building up a time-lapse picture of how the cells in an embryo develop during their first 24 hours. 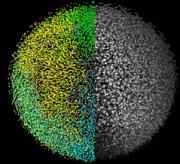 A technique known as digital scanned laser light sheet fluorescence microscopy (DSLM) is allowing researchers in Germany to record and track how a zebrafish embryo develops over its first 24 hours. The high-speed technique captures around 400,000 images over this time period, creating what the team calls a digital embryo (Science DOI: 10.1126/science.1162493).

"We have produced the first complete developmental blueprint of a vertebrate," Philipp Keller of the European Molecular Biology Laboratory in Heidelberg told optics.org. "A live embryo has been recorded at high imaging speed over a period of more than a day. The blueprint gives us a description of cell positions, divisions and migratory tracks in an entire embryo at subcellular resolution."

The idea behind DSLM is to generate a sheet of laser light a few microns in diameter and then use a scanner to move this sheet vertically and horizontally through the specimen to create a 3D image. The fluorescence generated along each line is collected by a high-speed camera system.

"DSLM uses separate objectives for illumination and fluorescence detection," explained Keller. "We can use a wide range of detection lenses (we operate in the 2.5 to 100× magnification range) without changing the properties of the illuminating sheet. I use 2 cameras in the detection system so have a maximum imaging speed of 2 × 15 frames per second at a camera chip size of 2048 × 2048 pixels."

Keller lists other advantages of DSLM because low photobleaching as only the in-focus region is illuminated, a good signal-to-noise that comes from using digital cameras and a high-quality illumination profile. "Due to the scanning approach, every line is illuminated with exactly the same energy, even in large specimens," he commented.

The team uses an argon-krypton gas laser capable of emitting at the important fluorescent protein excitation wavelengths of 488, 568 and 647 nm. The maximum output power is between 15 and 20 mW per wavelength, however, Keller typically uses just 30 µW at 488 nm to illuminate the embryos. A series of lenses allows Keller to displace the entire light sheet by 5 mm, and a laser scanner provides a line scan frequency of 1 kHz.

"The embryos are slightly smaller than 1 mm3 and do not change considerably in size during the first 24 hours," said Keller. "I obtain a lateral resolution of 300 nm and an axial resolution of 1000 nm. I typically record 400 images per time point and at least 1000 time points per embryo. One time-lapse experiment yields 3 Tb of raw data."

Equipped with a three-dimensional (3D) pattern of cell division, these are exciting times for Keller and his colleagues and there are many new paths to follow. "It would be great to transform the digital embryo into a complete virtual organism, including a 3D description of the physical forces that act during development," said Keller.