An IR spectroscopy technique for identifying proteins is said to be the first new method developed in the field for 20 years. 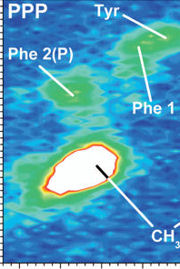 Optical spectroscopy could have significant potential for protein analysis, but conventional approaches produce overcongested spectra which makes feature assignment and quantification highly difficult. A UK team from Imperial College London and the Institute of Cancer Research has now shown that protein identification can be performed spectroscopically (PNAS 105 40 15352).

"This application uses a little-explored variant of 2D-infrared spectroscopy," David Klug of Imperial College London told optics.org. "The protein identification requires no chemical or biochemical preparation steps and achieves quantification by measuring spectroscopic features of the proteins." The development is claimed to be the first time in over 20 years that a new method for identifying proteins has been discovered.

The technique uses electron-vibration-vibration two-dimensional coherent IR spectroscopy (EVV 2DIR), also known as doubly vibrationally enhanced four-wave mixing spectroscopy. This involves the overlap of two tunable picosecond infrared beams and an 800 nm picosecond beam on the sample. The resulting vibrational signatures can be turned into two-dimensional "differentiation maps", from which the relative amounts of different amino acids can be deduced.

"We can identify the two-dimensional vibrational signatures of particular amino acid side chains," explained Klug. "Those signal strengths can be used to quantify the amino acid levels by using a methyl vibrational feature as an internal reference. Once we know the particular amino acid levels, we can identify the protein itself." With the current apparatus, effective differentiation can be achieved in four to five minutes per protein, and the team believes that this can be reduced to less than 1 min per protein by using the same technology.

An important property of EVV 2DIR is its potential for simple quantification of protein levels. "Absolute quantification is difficult to achieve with mass spectrometry, but relatively easy with EVV 2DIR because the average oscillator strength for the methyl group used as our internal standard appears to be the same for all the proteins studied so far," noted Klug. The team also discovered that changing the polarization of the three light beams helped to decongest the spectra.

An additional advantage of EVV 2DIR is that it is nondestructive, so the samples can be retained for further and more detailed investigations.

Potential applications for the technique include analyzing single cancer cells to find possible biomarkers for use in screening and diagnosis.

"We have established that the practical sensitivity limit with our apparatus is approximately 1012 protein molecules, or about 1.5 picomoles," said Klug. "Our next steps are to further increase this sensitivity and couple it to a multidimensional separation science rig. Then we can use it to study some biology."