Using GaAs instead of germanium substrates, NREL scientists can exploit the ideal combination of materials to produce a compound semiconductor cell. 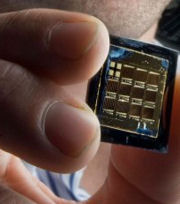 A versatile compound semiconductor solar cell design has claimed the world efficiency record, doing away with the germanium substrate that Spectrolab's previous record-holder was grown on. When light is focused on the latest cell from the US National Renewable Energy Laboratory (NREL) at a concentration of 326 suns, it is 40.8% efficient.

Although this is only a 0.1% increase from the previous record performance, it's still a significant milestone for the inverted metamorphic (IMM) approach. So says John Geisz, who is optimizing the cells at NREL's Golden, Colorado labs.

"The important point is that this new device, which has the potential to increase the efficiency by about 4%, has finally surpassed the highly mature predecessor technology," Geisz told compoundsemiconductor.net.

NREL has improved on the performance provided by the high-quality epitaxial material in IMM cells by tailoring the semiconductor compounds for their electronic properties.

"In order to optimize the band-gaps of the triple-junction device, we needed a middle junction at about 1.34 eV, which requires about 4% indium in InGaAs," Geisz said.

The NREL team has calculated that the ideal band-gap combination for a triple-junction cell combines the 1.34 eV middle junction with a 1.85 eV top and 0.93 eV bottom junction. Retaining the germanium substrate in the final device would make this impossible, so instead IMM cells are grown on a removable GaAs substrate.

That innovation allows Geisz and his colleagues to grow a lattice-matched GaInP junction that sits on top of the final cell directly from the GaAs substrate. Lattice matching provides high-quality epitaxial material, reducing dislocations that affect the top layer in Spectrolab's more conventional cells.

For the record-breaking cell, two further metamorphic junctions are grown - as opposed to one metamorphic and two lattice-matched, as in NREL's previous IMM cells. 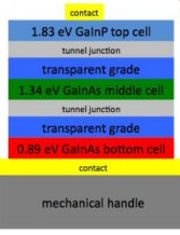 An AlGaInP buffer is deposited in graded steps from the GaInP top cell to match the lattice constant of the In0.04Ga0.96As middle cell. Consequently this junction can also be grown with few dislocations, while the buffer is designed to transmit any light to be converted into electricity by the lower junctions. The approach is then repeated for the In0.37Ga0.63As cell that will ultimately form the bottom junction, using GaInP as its buffer.

The team deposited gold contacts on top of this final structure and bonded to a carrier wafer. They then removed the GaAs substrate with selective chemical etching, and inverted the cell before further processing the new top surface.

Producing these cells in a manufacturing setting should be straightforward, Geisz says. NREL is now working on a quadruple-junction IMM cell that could achieve concentrated terrestrial efficiencies of 45-50%.