Biodegradable, biocompatible and implantable optical components made of silk are unveiled by researchers in the US. 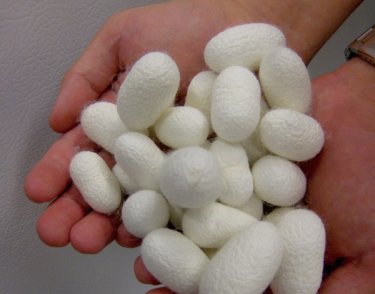 Turning a silk worm's cocoon into fully functional optical components such as microlens arrays and diffraction gratings with nanometre-scale features may sound like science fiction but that's exactly what a group of researchers at Tufts University, US, has achieved (Biomacromolecules 9 1214).

"We were looking for new materials for corneal tissue replacement and this led to observations of the optical properties of silk and its ability to replicate optical components with nanopatterned features," researcher Fiorenzo Omenetto told optics.org. "The entire system is biodegradable, biocompatible and implantable."

As an added bonus, the researchers were able to combine dopants such as enzymes and proteins into the optical components during the fabrication process. In many cases, complex chemistry is required to bind biological receptors to a surface so the ease with which dopants could be integrated into silk optics was a distinct advantage.

"The most compelling feature is that the components are prepared, processed and optimized all in aqueous environments and at ambient temperature that offers the opportunity to include biological receptors such as proteins and enzymes," commented Omenetto. "We can produce sophisticated optical elements in a pure protein that preserve the biochemical activity of the embedded bio-dopants."

The fabrication process begins by boiling silk worm cocoons for 30 minutes. The next step is to add the desired dopant, such as haemoglobin or the enzyme peroxidase, and then pour the silk fibroin solution onto negative molds of the required component. The solution is then left to evaporate leaving a film that is around 100 µm thick that is removed from the mold.

Omenetto and colleagues report that their components show high transmission (between 90 and 95%) across most of the visible spectrum. In the case of diffraction gratings, 37% of incident light from a white light supercontinuum source was redirected into the first diffracted order and the grooves were down to 125 nm wide with smooth sidewalls. The team was able to produce gratings as large as 50 x 50 mm.

"The bio-doping modalities open avenues for photonic components that are environmentally and biomedically compatiable," concluded Omenetto. "New functional features are seamlessly integrated into the optical element. This research happened by virtue of a biomaterials and a photonics expert sharing the same hallway. We will now continue to pursue the realization of silk-based optical devices and silk-based optical sensors."