An 850 nm vertical-cavity surface-emitting laser capable of achieving data rates of up to 25 Gbit/s makes its debut.

Today's 850 nm VCSELs operate at single-channel data rates of up to 10 Gbit/s and are the lasers of choice for use in short-reach data communication links in local and storage area networks. 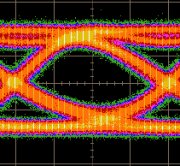 While there is a future need for even higher data rates it has been commonly believed that VCSELs operating at rates much higher than 10 Gbit/s will have to be scaled down in size to achieve the modulation bandwidth needed, thus operating at current densities too high for reliable operation.

Now, a research group from the Photonics Laboratory at the Department of Microtechnology and Nanoscience, Chalmers University of Technology, in Gothenburg, has shown that this is not necessarily the case (Electronics Letters 44 907).

By optimizing the VCSEL design with respect to differential gain, capacitance, electrical resistance and thermal impedance, the team has shown that 850 nm oxide-confined VCSELs with an aperture as large as 9 µm can achieve low threshold current, high differential efficiency and a modulation bandwidth as large as 21 GHz.

At a bias current of 6.5 mA, clear and open eyes could be generated at bit rates up to 25 Gbit/s and an extinction ratio of 6 dB. This current corresponds to a current density of 10 kA/cm2, which is at the level where the present 10 Gbit/s VCSEL technology operates.

"This clearly indicates the potential for reliable operation of directly modulated 850 nm VCSELs at very high data rates for future, high-capacity data communication links," Anders Larsson told optics.org. "This breakthrough was enabled by a good understanding of the various speed-limiting effects as well as the availability of advanced numerical simulation tools."

"Our VCSELs are oxide-confined VCSELs where a small opening in an electrically isolating layer of oxidized AlAs is used as a current aperture and an optical waveguide," explained Larsson. "It turns out that most of the capacitance comes from charge stored over this layer and we have lowered the capacitance by using two such layers, rather than one. This reduces the capacitance by almost a half."

The second limitation comes from the strength of the coupling between carriers and photons in the active region of the VCSEL where they interact through stimulated emission. The strength of this coupling is to a large degree determined by the differential gain, which is a measure of the dependence of optical gain on carrier density.

The third limitation comes from the increase of temperature inside the VCSEL as the drive current increases. "We have minimized heat generation by carefully engineering the design of the distributed Bragg reflectors of the VCSEL to minimize the electrical resistance and the optical loss," said Larsson.

The group hopes to build on its success and is aiming for even higher speeds up to 40 Gbit/s.

Author
Nadya Anscombe is a freelance journalist based in Bristol, UK.