New green sources are designed for solar and materials processing applications, but will benefit the active matrix OLED sector as well. 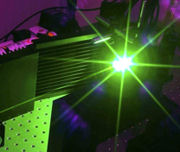 Two new high-power green lasers from Powerlase, the Starlase 100G and Starlase 200G, build on the company's penetration of the plasma flat panel display (FPD) industry and move it towards new markets. "These sources have been developed for a customer with two specific applications in mind," Mike Mason, Powerlase vice-president of technology, told optics.org. "One is a solar-cell application, while the other is in hard materials processing, cutting polycrystalline diamond (PCD)."

Both sources emit at 532 nm, with average powers of 100 W for the 100G and 200 W for 200G. "For both the solar and PCD applications, it is the high power combined with stability in the green wavelength that's critical" said Mason. "The customer's current process uses a green solid-state laser, but naturally there's a wish to move faster and achieve greater reliability."

That reliability is a feature that Powerlase believes it has honed through its experience in FPDs, and which it can now transfer into new markets. "Laser reliability is something we've worked extremely hard to achieve," commented Mason. "The dependability of the new Starlase sources comes on the back of the reliability that we've achieved already in the FPD industry, where we have far in excess of a million combined operating hours using our infrared lasers. Now we're applying those same techniques to the green system."

In addition to the two customer-defined applications for which they were developed, Mason expects the new sources to be well suited to green laser annealing (GLA) in the manufacture of active matrix OLED (AMOLED) displays. "Currently, excimer lasers are used to anneal the polycrystalline silicon prior to the manufacture of the transistors in AMOLED displays," said Mason. "We know that the laser we have developed is suitable for GLA, and can replace the excimer sources."

The annealing process involves generating a line profile with the green laser and running it across the display, which increases the silicon crystal size and so increases the electron mobility in the silicon. The design of the Starlase 200G, which contains two independently controllable oscillators that can be triggered to tailor the profile of the output pulses, makes it especially suitable for this operation.

"The twin oscillators give us a flexibility that's particularly useful for the AMOLED market," explained Mason. "To produce long silicon crystals needs long pulses. For annealing applications you need the pulse duration to be of the order of 100 nanoseconds, rather than the 40 or 50 nanoseconds that is traditional with these types of lasers. With the dual-cavity laser we can temporally separate the two beams from the two oscillators, to give a 'pseudo' long pulse, which is a huge benefit for those applications."

The solar sector is becoming of growing importance to Powerlase as it diversifies into new market sectors, according to Mason. "In the past we have concentrated on plasma displays, but now we are trying to broaden ourselves," he said. "We have made great efforts to augment our business in areas alongside our experience in plasma displays, and both solar and AMOLED are emerging businesses. There are many applications in solar cells that our lasers can be used for, and solar is a large growth area – rare in the current economic climate."