Researchers have built the first deformable liquid mirror from a magnetic liquid, which could be used to help astronomers to correct for atmospheric aberration. 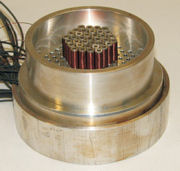 A team of scientists in Canada have for the first time engineered a liquid mirror that changes shape according to an applied magnetic field. The group from the Centre of Optics, Photonics and Lasers at Laval University in Quebec believes that its deformable mirror could be used to compensate for distortion in the images of telescopes and other optical devices (arXiv:0807.2397).

Liquid mirrors are nothing new. The Large Zenith Telescope in Canada, for example, has a 6 m diameter mirror that is a rotating dish filled with mercury. As the mercury spins around, its profile forms a perfect parabola.

While such mirrors can be made large and essentially defect-free, they do have two important limitations: they can only point straight up; and the shape of the mirror cannot be adjusted dynamically. Dynamic adjustment is important because astronomers are keen on using adaptive optics systems that change the shape of the mirror to correct for aberration caused by the atmosphere.

In 1994 researchers came up with an idea whereby magnetic coils change the shape of a mercury mirror containing an electric current, but they found that mercury is simply too heavy for this to work. More recently, another team of researchers proposed that a mirror in the form of a thin layer of fluid could be adjusted using an "electro-capillary" effect in an array of microchannels.


Denis Brousseau and colleagues at the Centre of Optics, Photonics and Lasers at Laval University in Quebec have taken a different approach. They made their mirror from a ferrofluid — a liquid that contains tiny particles of magnetite (Fe3O4) each about 10 nm in diameter.

The bulk of the liquid becomes magnetized and its surface acquires a shape to minimize the energy of the system Denis Brousseau, Laval University

"When ferrofluids are exposed to a magnetic field, the bulk of the liquid becomes magnetized and its surface acquires a shape to minimize the energy of the system," explained Brousseau, who adds that this involves gravitational and magnetic forces as well as the surface tension of the liquid.

The ferrofluid is contained in a dish that sits above a triangular array of 37 magnetic coils, each 5 mm in diameter. By controlling the current — and hence magnetic field — of each coil individually, the researchers can manipulate the surface profile of the mirror.

Brousseau and colleagues have tested their system, which is controlled via computer, in two ways: using misaligned lenses to direct incoming light; and placing Petri dishes in front of the mirror to introduce more severe optical aberrations. In both cases their mirror compensated effectively for the distortion.


The team also found that the shape of their mirror could be changed several hundred times per second—much faster than previous experiments on ferrofluids, which suggested that this rate would be limited to less than 20 times per second. This ability is important if the system is to be used to correct for atmospheric aberration.

Nandini Bhattacharya of the Delft University of Technology in the Netherlands is impressed by the Laval team's results. Bhattacharya, who worked on designs for electro-capillary mirrors said: "This work clearly shows that ferrofluids hold a lot of promise for the development of efficient liquid-based deformable mirrors".

One major drawback of ferrofluid mirrors is that they are not very good at reflecting light. However, the Laval team has already had some success in solving this problem by coating the surface of the ferrofluid with a layer of highly reflective material.

While a ferrofluid mirror could be used in telescopes of the future, Brousseau believes that the first immediate applications will be in visual science, where it could be used to correct defects in the eye's retina, and in metrology.

The team is now looking at ways to improve the mirror's performance and size — for example, by shrinking the coils to 1 mm diameter.