High-throughput roll-to-roll production methods have been used to make a surface-emitting DBR source. 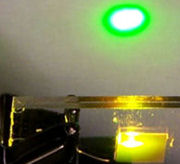 Fabricating lasers using polymeric gain media and resonators is attractive due to the relative ease of processing polymers compared with inorganic semiconductors, but manufacturing the microstructures needed has been challenging.

Now a US team has made a surface-emitting distributed Bragg reflector (DBR) laser that has a compression moulded gain medium and a co-extruded resonator, which could allow mass production of polymer lasers by rapid roll-to-roll methods (Optics Express 16 14 10358).

Key to the breakthrough was producing the DBR layers. "The roll-to-roll process is the only suitable one for mass production of polymer lasers, but producing the highly reflective multilayer mirrors had been the main barrier," Kenneth Singer of Case Western Reserve University told optics.org. "Our innovation relates to the manufacture of an all-polymer laser mirror as the DBR layer, which means that the laser can be fabricated completely from mass-production manufacturing processes."

Each DBR mirror was made by a layer-multiplying co-extrusion process, which results in a structure having 128 alternating layers of polymethylmethacrylate (PMMA) and polystyrene (PS). The difference in refractive indices of the two polymers causes the multilayer film to display a sharp reflection band. Controlling the thickness of the layers during extrusion and by subsequent stretching allowed the reflection properties to be fine tuned.

The gain media were fabricated by compression-moulding thermoplastic host polymers that had been doped with suitable organic laser dyes. Sandwiching this active layer between two DBR mirrors produced the laser structure.

Optically pumped DBR lasers assembled from these components displayed single and multimode lasing in the reflection band of the resonators, with a slope efficiency of nearly 19% and lasing thresholds as low as 90 µJ/cm-2. Altering the layer thickness of the DBR films and the dye in the gain medium enables the lasing wavelength to be controlled. "The low threshold and high efficiency are the result of this laser design," commented Singer. "The design and process is flexible so that lasers of any wavelength or multiple wavelengths can be produced." 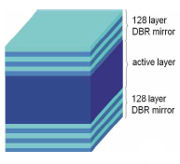 Future developments will focus on more stable lasing gain media and on incorporating the gain medium into the multilayer film. This would allow a distributed feedback laser to be fabricated using a single multilayer coextruder.

"Our main breakthrough is the fact that the laser can be fabricated completely from mass-producible roll-to-roll manufacturing processes, which opens up the possibility of low-cost mass-producible lasers," said Singer. "These could be used in spectroscopy, remote sensing, data communication, storage and display applications."

This work came out of the US National Science Foundation sponsored Centre for Layered Polymer Systems (CLiPS) at Case Western Reserve University in Cleveland, Ohio.