Researchers have shown that high-dispersion mirrors can replace prisms and gratings to produce efficient laser output from a compact source. 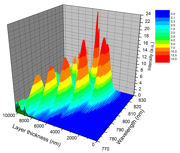 Ti:sapphire femtosecond lasers currently use optical systems based on prisms or diffraction gratings to stretch and recompress pulses before and after amplification. These optical systems are complex, rather lossy and alignment sensitive. Researchers from Ferenc Krausz's group at the Ludwig-Maximilians University and Max-Planck Institute of Quantum Optics, both in Garching, Germany, believe high-dispersion mirrors (HDMs) are the solution (Optics Express 16 10220).

Vladimir Pervak and his colleagues believe low-loss, HDMs can take over the role of prisms and possibly gratings in conventional chirped-pulse amplifier (CPA) systems with the added benefit of providing high-order dispersion control.

The group has demonstrated the usability of HDMs in high-energy femtosecond oscillators, such as a chirped pulse Ti:Sapphire oscillator and an Yb:YAG disk oscillator. In both cases a group delay dispersion (GDD) of the order of 2 × 104 fs2 was introduced, accompanied with an overall transmission loss as low as ∼ 2%.

"To achieve high dispersion in a laser system based on prisms, you need a large distance, possibly up to 10 m, between the prisms," Pervak told optics.org. "Systems based on HDMs can be very compact, achieving the same dispersion with a total mirror compressor size of about 10 cm."

The group had to make mirrors with very high dispersion in order to replace prisms and gratings. To make the mirrors, the researchers used magnetron sputtering to deposit alternate layers of tantalum pentoxide (Ta2O5) and silicon dioxide (SiO2). These materials have high (2.12 @ 800 nm) and low (1.47 @ 800 nm) refractive index, respectively. The resultant HDMs have layer thicknesses ranging between 25 nm and 400 nm, and a total physical thickness of approximately 10 µm. The total group delay (GD) in the HDM structure is a result of two combined effects: penetration effect (used in a conventional dispersive mirror); and an interferometer effect. "For our HDMs, the maximal GD that can be obtained by the pure penetration effect is 100 fs," said Pervak. "But our HDM provides a total GD of 150 fs. Therefore, 50 fs of the delay can be attributed to the interferometer effect."

He admits that making HDMs is challenging and that this has been the limiting factor to their use in this application. "But the advantages they offer means that it is worth the effort," he said. "When compared with using prisms, HDMs offer a much higher output efficiency; have no wavelength bandwidth limit; enable a more compact system; and give a clean pulse with no satellite pulses."

However, extraordinary sensitivity of the HDM design to manufacturing errors suggests that it may be difficult to manufacture a HDM with well-established technologies, such as electron-beam (ion-assisted) evaporation and ion-beam sputtering.

But despite these challenges, the Garching researchers plan to take the next step in their research and use HDMs to make a chirped pulsed amplifier. The mirrors have already been used by several groups at the Munich Centre for Advanced Photonics and the group is looking to commercialize their research.

Author
Nadya Anscombe is a freelance journalist based in Bristol, UK.