A direct imaging technique could help astronomers to detect the faint light from distant planets by blocking light from parent stars.

In a bid to find habitable planets beyond our own solar system, scientists in the US have come up with an imaging system that can detect light from a distant planet over the tremendous glare from its parent star. The group uses an optical vortex coronagraph (OVC), which focuses light from a planet and its parent star to two different positions enabling light from the star to be blocked (Optics Express 16 10200).

"All of the exoplanets discovered to date have been found by indirect means - not direct imaging," Grover Swartzlander from the University of Arizona told optics.org. "The OVC creates an ideal blind spot, rendering the star invisible, but leaving the planet light intact. It's not trivial to get the device to work in the lab. In spite of those difficulties, our results show that the device can, in fact, be made to work on a telescope." 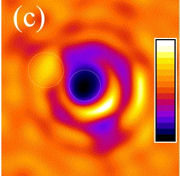 The key component that makes this possible is an optical vortex lens (OVL), which resembles a spiral staircase and converts a plane wave into a spiral or helical wave.

"Optical vortices provide a powerful means of spatially filtering images," explained Swartzlander. "These results are the first successful demonstration of an optical vortex lens outside the laboratory. Optical vortices have matured beyond the stage of an esoteric curiosity to a valued functioning device level."

The team attached an OVL to a telescope, which in turn was pointed at a binary star system. We then blocked light from the brighter primary star, thereby enhancing the image of the weaker secondary star.

"Perfect imaging systems do not focus starlight to a point, but rather to an Airy disk surrounded by concentric rings. It is theoretically not possible to prevent light from these rings from reaching a detector using a conventional coronagraph," explained Swartzlander. "However, the OVC diffracts starlight to a single ring outside of the pupil of the telescope. A so-called 'Lyot stop' (aperture) is then used to block this light from reaching the detector."