Attosecond pulses could allow us to explore the ultimate limits of many modern technologies including semiconductor electronics and optoelectronics. Marie Freebody speaks to Reinhard Kienberger about the progress so far and what to expect in the future. 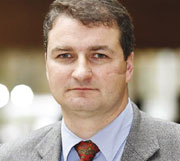 Reinhard Kienberger currently heads up the attosecond dynamics independent junior research group at the Max-Planck-Institute of Quantum Optics in Garching, Germany. His research on sub-femtosecond pulse generation has led to the first measurement of single extreme ultraviolet (XUV) pulses with a duration of less than 1 fs. Kienberger has been involved in using XUV pulses for steering electron wavepackets on an attosecond timescale. He also made leading contributions to the development of the attosecond streak camera, a device that is able to record atomic transients.

Can you summarize how attosecond pulses are produced?
Attosecond pulses can only be generated at wavelengths shorter than the visible range. This is because a pulse cannot be made shorter than one oscillation of the carrier wave, which is about 2.5 fs for red light. At present, the most successful way to generate attosecond pulses in the XUV or X-ray range is by frequency conversion from ultrashort laser pulses using a process known as high-order harmonic generation (HHG). In HHG, intense laser pulses impinge on a gas target for example, which ionizes the atoms. The electrons then accelerate back to the ions releasing energy as a burst of X-ray photons that last only a few hundred attoseconds or less. To produce an isolated burst, the driving laser field must be extremely short, lasting just a few optical cycles. Within the cycles, only one should have the dominant amplitude. The highest-order harmonics are produced near the intensity peak of the laser pulse where the re-collision energy of the electrons is highest and the laser field is largest. Passing the harmonics through a filter that transmits only the highest frequencies allows you to select radiation near the peak of the pulse. This method has been used to generate pulses in the range of 100 as.