A highly efficient end-pumped microchip laser has for the first time been engineered to emit radially and azimuthally polarized light. 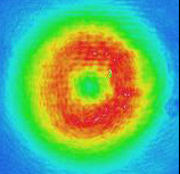 Researchers in Japan have generated radially and azimuthally polarized light from an end-pumped Nd:YAG microchip laser for the first time. According to the group, its simple and compact design provides the highest laser efficiency ever reported as well as control over modal symmetry and polarization purity (Optics Express 16 10841).

Radially polarized beams are useful in optical tweezers as well as materials processing applications such as coating and drilling. When focused using a high numerical-aperture lens, such a beam can form a sharper focal spot than a non-radially polarized beam, which makes it useful for high-resolution microscopy.

Until now, a side-pumped laser configuration has been used to produce radial or azimuthal polarization. However, in this set-up the laser efficiency is low due to limited overlap between the pumping and lasing areas. What's more, the cylindrical symmetry of the lasing mode can be affected by the spatial deployment of the laser diode pump sources and an intracavity aperture is required to suppress the high-order transverse mode.

Now, the team is using an end-pumped configuration in which the light from the laser diode is focused to a spot size of 100 microns inside the gain microchip. "The spatial overlap between the pump absorption area and the area of the lasing mode is near unity," explained Li. "This means that the conversion of pump light into laser emission can be maximised. In addition, the transverse dimension of the gain area imposes an intrinsic aperture to the lasing mode, which assures cylindrical symmetry."

The laser consists of a 1.9 mm thick Nd:YAG ceramic microchip and a polarization-selective concentric grating mirror (PCG). The laser cavity measures 6.5 cm in length and is end-pumped using a fibre-coupled 808 nm laser diode. The grating mirror is composed of alternating layers of high and low refractive-index materials (Nb2O5/SiO2) shaped into triangular concentric corrugations with sub-wavelength layer thickness. When the pump power exceeds the lasing threshold, the system emits an annular beam with a dark centre, which can be radially or azimuthally polarized using different variants of the PCG. 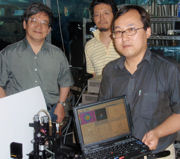