A thin-disk laser has for the first time been engineered to achieve pulse energies greater than 10µJ without the need for external amplification. 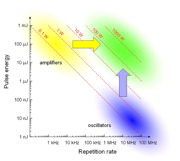 Ursula Keller's group at ETH Zurich in Switzerland has built the first Yb:YAG thin-disk laser to deliver femtosecond pulses with energies above 10 µJ. The team believes that the design could yield a compact source of high-power ultrashort pulses for applications such as high-resolution imaging and precision micro- and nanomachining.

"Our motivation was to increase the pulse energy of femtosecond oscillators," team member Thomas Südmeyer told optics.org. "In this way, many experiments and applications that previously relied on complex and expensive amplifier systems are now within the reach of simple and cost-efficient diode-pumped solid-state lasers."

Generating high-energy femtosecond pulses is a crucial requirement for many scientific and industrial applications. The normal approach in these applications is to exploit a laser amplifier system, but the repetition rate is typically limited to the kilohertz regime – which in turn affects the signal-to-noise ratio and also restricts the throughput and precision of materials processing applications.

Other techniques are capable of delivering microjoule pulses at megahertz repetition rates, but these require complex amplifier systems with a seed laser and multiple amplification stages. In contrast, the new laser developed by Südmeyer and colleagues produces femtosecond pulses directly using a high-power oscillator, eliminating the need for any external amplification.

The laser delivers up to 45 W of average power at a repetition rate of 4 MHz. This yields 11.3 µJ pulses with a duration of 800 fs and a peak power of 12.5 MW, which Südmeyer says is sufficient for driving high-field experiments.

According to Südmeyer, the latest results are the culmination of several years' work on thin-disk lasers, which enable high average powers to be achieved with good beam quality. The Swiss team use a multiple-pass cavity to extend the length of the resonator to 37 m, while stable femtosecond pulses are produced by passive modelocking using a semiconductor saturable absorber mirror (SESAM). "This results in a power-scalable solution for the generation of pulses with durations in the femtosecond regime," said Südmeyer.

Until now, however, the pulse energies that could be produced from this set-up were limited to a few microjoules. "Our initial effort to increase the pulse energy was limited by some excess nonlinearity, which initially was not identified," commented Südmeyer. "We found that the source of the additional instabilities was the nonlinearity of the air atmosphere inside the laser cavity."

The solution, says Südmeyer, is to flood the laser cavity with helium, which has a negligible nonlinearity compared with air. The repetition rate was reduced to 4 MHz in order to produce pulses with energies greater that 10 µJ.

The team now plans to increase the average power to beyond 500 W and the pulse energy towards 100 µJ. "We will also investigate in collaboration with Professor Huber from the University in Hamburg new thin disk materials, which will allow us to achieve shorter pulse durations," said Südmeyer.

The researchers reported their work in Optics Express.