The inside of a single cell has been imaged in 3D with nanoscale resolution for the first time. 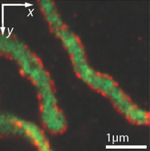 The highest resolution 3D images of the inside of single cells have been generated by scientists at the Max Planck Institute in Germany. The group says that its scanning fluorescent microscope obtains a spatial resolution far below the wavelength of light, allowing it to image the interior of cells with unprecedented detail (Nature Methods DOI:10.1038).

"We have produced the smallest focal spots that have been attained so far in a scanning fluorescent microscope, and thus attained the best 3D resolution inside a transparent object such as a cell," Stefan Hell, from the Department of NanoBiophotonics in Göttingen, told optics.org. "Contrary to previous systems, the focal spot, which measures 40–45 nm in diameter, is both spherical and of subdiffraction dimensions enabling isotropic 3D resolution on the nanoscale."

The resolution of a standard confocal system is limited to over 200 nm in the focal plane and over 500 nm along the optic axis. "We have achieved a resolution of 40–45 nm in all directions and this can be improved even further since our scheme allows further confinement of fluorescent spot (i.e. the effective PSF of the microscope)," commented Hell.

3D microscopy offers the only method of non-invasively visualizing the interior of cells. According to Hell, the level of 3D resolution is approaching that of an electron microscope but with the advantage of being able to use fluorescent tags to identify specific proteins.

The group's setup is a lens-based fluorescence microscope that merges the fundamentals from two existing microscopy techniques. "We have developed an effective microscopy scheme called isoSTED, which combines elements of stimulated emission depletion (STED) and 4Pi microscopy to compress the fluorescent spot to subdiffraction dimensions," explained Hell.

In STED microscopy, very short laser pulses excite a fluorescent tag attached to the sample under observation. This excitation pulse is immediately followed by a depletion pulse, tuned to an emission line of the fluorescent tag. The depletion pulse causes stimulated emission, which moves electrons from the excited state from which fluorescence occurs to a lower energy state. This decreases the effective spot size of the excited region resulting in higher resolution imaging.

The idea behind 4Pi microscopy is to illuminate the sample with a pair of synchronized laser pulses in such a way that the pulses interfere constructively. This is equivalent to increasing the total aperture of the system.