Light takes off for Lévy flight

Researchers in Italy have for the first time engineered an optical material to support Lévy flights, which fundamentally alter the way that light waves travel through the material. 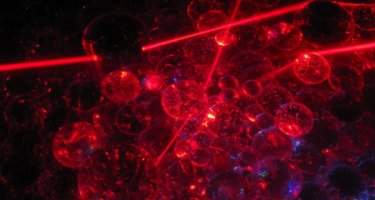 A new optical material that acts as a "superdiffusor" has been created by Diederik Wiersma and colleagues at the European Laboratory for Non-linear Spectroscopy (LENS) in Florence, Italy. Light travels through the material not by conventional Brownian diffusion, but in a random series of shorter and longer steps that together form a Lévy flight.

"Lévy flights are of fundamental importance in many transport phenomena, such as animals searching for food, earthquake patterns and human travel," Wiersma told optics.org. "But this is the first time that Lévy flights have been observed in a material. It's fascinating to see that light waves, animals and earthquakes all follow the same basic laws."