A fibre-based source of near-ideal Bessel beams will be crucial for applications that require remote beam delivery as well as diffraction-free propagation.

Scientists at OFS Laboratories in Somerset, New Jersey, have for the first time fabricated a fibre-based device that delivers a Bessel-like beam with characteristics that have so far only been available from free-space optical devices. The output beam achieves diffraction-free propagation over distances of some 450 µm, which leads to a depth-of-focus some 32 times greater than for a conventional Gaussian beam, and is also able to fully recover its original shape after passing an opaque obstruction.

Although truncated, these real-world Bessel beams offer some unique properties that have already been exploited in a number of applications. Unlike Gaussian beams, they can propagate for a certain distance without diffraction, which means that they maintain the same spot size over relatively long distances. Such a large depth-of-focus has been used, for example, to enhance nonlinear interactions in crystals and to trap biological cells in specific lattice formations.

Bessel beams are also able to recover their original shape after passing an obstruction, which makes them useful for trapping a number of distributed cells and atoms at the same time. "This self-healing behaviour is also interesting for free-space communications and power delivery from lasers, because these beams may be more resistant to atmospheric distortions such as scintillation than conventional Gaussian beams," explained Ramachandran.

Bessel beam output
According to Ramachandran, the Bessel beam is in fact a well-defined mode in the fibre structure, but in the past it has proved difficult to excite this mode for subsequent emission. The OFS team solved this problem by using a fibre grating to achieve phase matching between the incoming Gaussian beam and the desired Bessel mode. 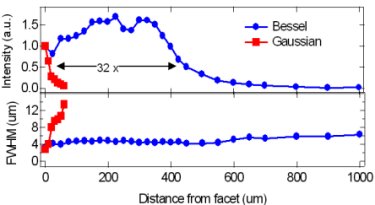 The output Bessel beam has very similar characteristics to those produced by axicons, but the fibre-based device is about three times smaller than the free-space optical solution. Ramachandran and his colleague Samir Ghalmi measured a diffraction-resistant range of 450 µm for a beam with a central peak of 3.1 µm, while the intensity of a Gaussian-shaped spot of similar size fell by 50% after travelling a distance of just 14 µm.

The OFS scientists also confirmed that the output Bessel beam was able to fully recover its shape 2 cm after passing an opaque spot that was five times larger than the beam diameter, which in this case was 50  µm. And the recovery of the central high-intensity spot only improves as the beam travels further away from the obstruction, with the outer rings of the beam acting to "feed" the central spot to recreate the original shape.

According to Ramachandran, the fibre-based device would be particularly useful for applications that require remote delivery of Bessel beams. These include endoscopic systems that enable cell manipulation inside the human body, and free-space propagation from high-power fibre lasers. "These beam shapes have very large mode areas inside the fibre, so rare-earth doped versions of these fibres could be used as amplifiers to yield a high-power Bessel beam output," he said.

Ramachandran told optics.org that potential customers have already shown an interest in the device, which could lead to commercialization within the next six to twelve months. The scientists will first need to improve the packaging, since at the moment the mode producing the Bessel beam is confined by the silica-air boundary of the fibre cladding. Ramachandran also plans to investigate the effect of the refractive index contrast on the performance of the fibre waveguide, since this could enable the diffraction-resistant range to be tuned to achieve specific depth-of-foci.