Tucson in Arizona, US, is recognized as an emerging leader in the knowledge-based global economy, and optics is a key driver. Jacqueline Hewett speaks to community leaders in academia and industry to discover the factors that are fuelling the city's growth.

The city of Tucson in southern Arizona, US, is often referred to as "Optics Valley" because of the high concentration of optics-related firms and the large pool of highly qualified professionals that have located there. In the last 10 years alone, the population of Tucson and the surrounding area has passed the one million milestone and the number of people working in optics state-wide has grown from 2500, producing revenues of $180 m (€114 m) to 25,000 with revenues of $2.3 bn. 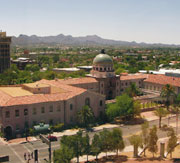 This monumental growth comes from a number of factors, not least an optics community where all individuals are pulling in the same direction to achieve a common goal. Tucson is home to the University of Arizona's world-renowned College of Optical Sciences (COS), a role-model cluster in the form of the Arizona Optics Industry Association, and active economic development bodies that strive to generate more wealth in the community.