Power meters rise to the challenge

As lasers become more powerful and diverse, so power meters have had to adapt. Ephraim Greenfield of Ophir Optronics gives us an overview of the different power meters available and outlines how they have advanced to meet the new demands of today's laser systems.

The laser industry is advancing steadily with new wavelengths, higher powers and energies, and new applications emerging continuously. As the power, energy and variety of new lasers advances, so the measurement of these lasers has to improve.

The basic technology of laser power/energy measurement has not changed in the last 10 years. There are still three basic ways to measure laser power and energy. 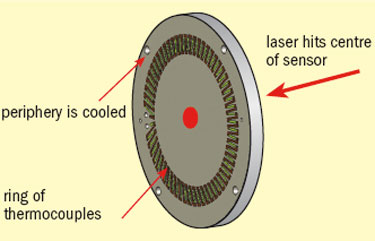 The first type of laser measurement device is the thermopile detector (figure 1) that measures the amount of heat flowing through the detector by its heating effect on an array of thermocouples. When a laser beam impinges on the central area of the sensor disc, the heat flows radially towards the cooled periphery. Since the total amount of heat flowing through the thermopile ring is independent of the beam size or position (as long as the laser beam is within the thermopile area) the reading will be quite independent of beam size and position.