'Multidisciplinarians' are the future of photonics

Photonic enabling technologies are undergoing a second renaissance, argues Tom Baer, executive director of the Stanford Photonics Research Center in California, US. Joe McEntee asked him how industry and academia can take maximum advantage of the growth opportunities. 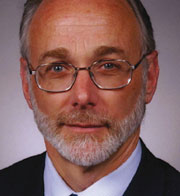 Tom Baer is one of those rare scientists who seems equally at home on either side of the industry–research divide. Right now, as executive director of the Stanford Photonics Research Center (SPRC) at Stanford University in California, he heads up one of the largest photonics research programmes in the US.

SPRC's Ginzton Laboratory provides the focal point for that programme and an interdisciplinary research team that comprises around 40 professors and 200 graduate students and postdocs. Theirs is a wide-ranging brief – SPRC working groups span information technology, telecoms, integrated photonics, microscopy, neuroscience and solar cells – though with a common objective: to partner with industry to bring innovative photonic technologies to market.

Presumably the prospects for solar energy boil down to cost per watt versus conventional energy technologies?
Very much so, and what's exciting to see is that these are the challenges that are being addressed by optics researchers and industry developers. Fundamentally, the R&D community is looking at new materials for lightweight substrates that will reduce cost of installation and the overall life-cycle cost of solar-energy systems.

Solar technology excites me tremendously and it's an area of strength for SPRC. This is a field where scientists can make a big contribution to society. It's our responsibility and our destiny to make this happen over the next decade or so.

What about your work in more traditional areas such as fibre-optic communication?
There's continued evolution here too. Work on 40 and 100 Gbit/s transmission is a big focus at SPRC. Specifically, there's research in silicon photonics to figure out how we can couple both the source and modulation technologies more effectively to the electronic signal-processing ICs. At the same time, we're also looking at 10 Gbit/s technology and how that can be more effectively deployed. For example, we're looking at 10 Gbit/s networks based on multimode fibre and how you can encode/decode information over an almost incoherent pipeline.

Are there any common themes that you see emerging across SPRC's different fields of activity?
If you look at what's happened in photonics over the last decade, it's like a second renaissance. The 1960s and 1970s were all about the evolution of the laser into the flavours we have today. There's a similar type of renaissance going on now with all manner of enabling technologies – metamaterials, MEMS, photonic crystals, efficient sources and detectors in new areas of the spectrum – coming together to solve a wide range of scientific and commercial problems.

A striking example of this convergence can be seen in biomedical optics, where scientists are coming up with remarkable insights into basic cell biology. Mark Schnitzer's team here at Stanford, for example, is exploiting ultrafast lasers in two-photon microscopy to study calcium pulses and fluxes in the neural pathways of the brains of living, behaving animals. Using photonics, we're actually decoding the circuitry of the brain and watching it happen in real time – in effect, reading the thoughts of these animals. It's a phenomenal advance in our ability to model what the brain is all about.

Also at SPRC, Chris Contag and his group are doing some remarkable work using viruses to attack tumours. They're then monitoring the "kill power" of those viruses non-invasively using real-time bioluminescence that's been genetically engineered into the living organism. Here again you see this coming together of enabling photonic technologies.

How would you rate the prospects for clinical applications of optical technologies – for example, in medical imaging? If you talk to medical imaging people today, you find that they're overwhelmed with data, whether it's computed tomography (CT), magnetic resonance imaging or positron emission tomography. All of these modalities have photonic elements to them, if nothing else just in the display of the information.

What I see as the challenge – and an exciting one in the interdisciplinary sense – is the interpretation of medical images now that we can get down to the order of a few hundred micron resolution and do a full CT scan of the whole chest cavity in 2.7 s. That's extremely fast and generates 0.5 Gbyte of data in 3D – more than the human visual system can take in.

What we need to do as a technology community is to develop the analytical tools to be able to extract relevant clinical information and render it in such a way that a clear diagnostic decision can be made. In some cases, this will mean a combination of technologies. For example, CT to measure structure, optics to measure function (parameters like blood oxygenation or vascularization), yielding a set of metrics that can be used to characterize whether something is benign or malignant. In effect, the optical technologies will provide an ability to measure along a different coordinate – the functional coordinate.

So you're talking technology push, but also clinical pull?
What's going to be critical is a better interface between practising clinicians and technology developers. We need to get the clinicians and the technologists together and that's one of my priorities when I take the helm at the OSA next year, establishing direct relations with clinical professional societies like the Radiological Society of North America and the American Association for Cancer Research. There's a parallel to the work that I do at SPRC getting industry working with researchers.

To round off, what advice would you give early-career optical scientists and engineers?
Photonics is an enabling technology – like electronics – in that it has so many different fields where it can be used. Something I instil in SPRC students from the off is that if they can learn more than one discipline it really distinguishes them. The more unique fields of enquiry you have knowledge of, the more you become unique in the eyes of your employers. Multidisciplinarians are the future of photonics.

• This article originally appeared in the May 2008 issue of Optics & Laser Europe magazine.