Optics.org speaks to researchers in the UK who are scaling up the power of supercontinuum sources in a bid to reach new applications. 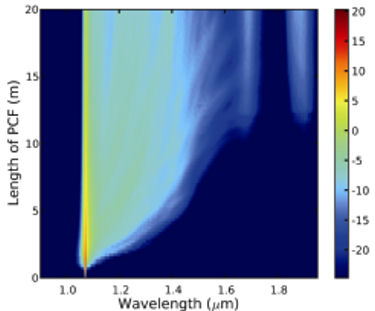 An infrared supercontinuum that delivers the highest spectral power density (SPD) to date has been produced by researchers from Imperial College London. The team says that its 29 W supercontinuum offers an SPD of over 50 mW/nm between 1.06 and 1.4 µm, which it believes is an order of magnitude greater than previous work (Optics Express 16 5954).

"We wanted to create an infrared broadband source with a high SPD while also improving the spectral flatness and bandwidth of the continuum," Burly Cumberland, a researcher at Imperial College London, told optics.org. "We're really hoping that this extra SPD will open up the use of supercontinuum sources in new applications in imaging, spectroscopy, microscopy and sensing where such sources have not previously been considered."

The difficulty with obtaining high-power supercontinua at infrared wavelengths is the lack of active rare earth ions covering this region. "The main ones such as Yb/Nd are centred around 1.064 µm and Er at 1.55 µm, which means that many wavelengths simply aren't easily accessible," explained Cumberland. "Obtaining high spectral powers requires careful design of the fibre and the pump along with overcoming the difficulties of launching high-power pumps into small core fibres. We have made significant steps forward on these two points over the last 18 months."

The team used a 50 W continuous-wave Yb fibre laser spliced into a 20 m length of photonic crystal fibre, which results in a supercontinuum that spans 1.06–1.67 µm. Pulsed laser sources are conventionally used to generate supercontinua, however these are limited by their average powers. 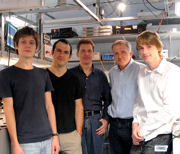 The supercontinuum is generated from the combination of two nonlinear processes that take place within the fibre. "The fibre's design is optimized so that the high-power pump induces a nonlinear process called modulation instability," explained Cumberland. "This process generates fundamental solitons, which are short pulses that maintain their properties under small perturbations."

A second nonlinear process called Raman amplification combines with the solitons to generate an effect known as the soliton-self-frequency shift. This effect causes the solitons to constantly shift to longer wavelengths and hence generating the supercontinuum.

Although the entire supercontinuum spans 1.06–1.67 µm, the high SPD begins to fall off at 1.4 µm due to water absorption losses that occur at the air-glass surfaces in the photonic crystal fibre. "We managed to extend the continuum beyond 1.4 µm by using a short length of photonic crystal fibre," explained Cumberland. "Using a short length of fibre not only minimizes the high water loss but also helps to increase the SPD."

The team now plans to scale up the power and generate high SPD sources at visible wavelengths.