A polymer laser that is pumped by an LED could provide a low-cost and compact source of visible light. 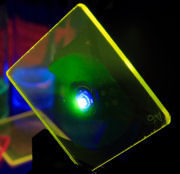 "Semiconducting polymers offer the prospect of easy-to-make, tunable visible lasers, but until now have required expensive lasers to pump them," Ifor Samuel from St Andrews' Organic Semiconductor Centre told optics.org. "We have shown that it is possible to use a nitride LED to pump a polymer laser leading to a compact, easy-to-make and low-cost package."

Very few LED pumped lasers of any type have ever been made. One of the key challenges is that the light from an LED is incoherent, which means that it cannot be focussed very effectively. The team overcame this by removing the LED's encapsulation and placing the polymer laser directly on top of the LED so that focusing was not required.

"People desire directly electrically pumped polymer lasers because they would be a compact, simple-to-make, low-cost visible source," he commented. "What we have achieved is functionally equivalent and it means that polymer lasers could become widespread without having to wait for direct electrical pumping to be achieved."

"Organic semiconductors have low charge mobility compared with inorganic semiconductors, which means that it is hard to get very high current densities in the gain material," explained Samuel. "It also means that the contact has to be very close to the laser (around 200 nm). Another challenge is the high absorption of charge carriers within the gain medium, which is a huge problem in a laser where gain must be greater than loss."


The team used a nanosecond-pulsed 440 nm InGaN LED in its experiments. "Thanks to the high mobility of nitride materials we avoid all of these problems," explained Samuel. "The LED generates light that we couple into a polymer laser, which then emits tunable and coherent light at wavelengths not accessible by nitride LEDs."

Another key element that enables LED pumping is the team's careful design of the polymer distributed feedback (DFB) laser. The laser consists of a thin 350 nm fluorene copolymer film placed on top of a corrugated silica substrate. In the design, the thin polymer layer provides the gain and the corrugation provides the feedback.

"The absorption of the polymer is so strong that despite the thin layer used, it still absorbs most of the light from the LED," explained Samuel. "This optical design also provides a reasonably long interaction time compared with other polymer lasers and therefore results in a threshold low enough for LED pumping."

The team is hoping to demonstrate a range of colours from its lasers and is working towards steady-state operation.