Researchers in Switzerland and the US have developed a new theoretical framework that for the first time explains the behaviour of unconventional laser systems such as diffusive random lasers. 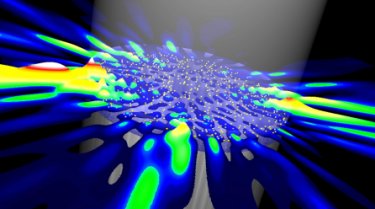 Standard laser theory has long been used to understand and predict the operation of conventional lasers, but serious problems emerge when it's applied to novel laser systems with unusual and complex cavity designs. Now, researchers in the US and Switzerland have formulated a general laser theory that they believe could offer a powerful design tool for a new generation of micro- and nanolasers.

"In our most optimistic scenario, our approach would become the standard way to solve and understand semi-classical laser theory," Hakan Türeci, a scientist at Swiss Federal Institute of Technology in Zurich (ETH Zurich), told optics.org "Ultimately it becomes part of the answer to the question: how does a laser work?"

The research team has so far applied its new theory to diffusive random lasers (DRLs), a new class of laser that has proved particularly difficult to analyse with standard laser theory. These random lasers are made either from a random aggregate of particles that scatter light and have gain, or from scattering particles embedded in a gain medium. The light is trapped not by mirrors, but by multiple scattering between subwavelength particles. 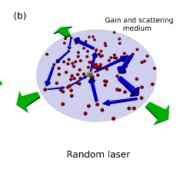 In a DRL the scattering is so weak that, in the absence of gain, light leaks out from the laser resonator, resulting in light emission at natural frequencies that are not well defined. But when lasing sets in, a number of sharp oscillation frequencies appear that bear no straightforward relationship to the natural oscillations of the system.

This somewhat surprising lasing mechanism cannot be understood using standard laser theory, which is based on the analysis of resonances in high-quality-factor, passive-cavity modes. Such passive-mode analysis often assumes perfectly reflecting mirrors and no leakage – which is clearly not the case for DRLs.

Türeci, who has long studied DRLs, knows all too well the shortcomings of passive-cavity mode analysis when applied to DRL systems. "The passive cavity approach fails spectacularly," Türeci told optics.org. "The lasing modes of DRLs have little to do with passive-cavity resonances."

Türeci has now worked with Douglas Stone and colleagues at Yale University in Connecticut, US, to develop a model that explains the operation of random lasers, as well as more conventional lasers (Science 320 643). "Given the geometry of the laser resonator and simple properties of the gain medium, we can predict the output power as a function of pump power, the number of lasing modes, lasing frequencies, and the electric field spatial dependence inside and outside the resonator," said Türeci.

The model works by considering all the possible ways that light can reflect back and forth in the medium, and works out how these modes interact with each other to define the wavelengths of the light that is produced by the laser. By analysing the strong nonlinear interactions between lasing modes, the model offers new insight into the steady-state physics behind DRLs.

Using the new theory, the team has been able to reproduce a key feature of DRLs that had eluded previous models – that the wavelengths of the laser light emitted are always the same, no matter how the DRL is pumped. The modal interactions in DRLs were also found to be extremely strong, which has important consequences for lasing mode thresholds and output intensities. 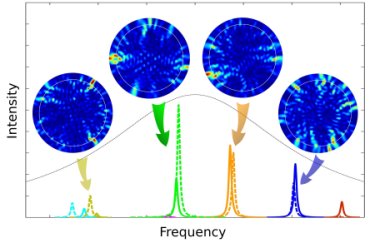 Another useful feature of the model is that it is valid for lasing operation well above threshold, a regime that is not well described by standard semi-classical laser theory. What's more, says Türeci, the results are much easier to obtain and interpret than those from previous time-dependent simulations.

Theory offers new design tool
The team is currently using their theory to understand the stability of the output wavelengths, which is important for many of the potential applications for random lasers. Türeci is also confident that the theory will be used to boost the performance of other unconventional lasers such as those based on chaotic resonators or photonic crystal-based cavities.

Türeci and his coworkers now plan detailed quantitative tests that will compare their approach with full simulations of DRLs using Maxwell-Bloch equations. This will show whether their new approach could replace the difficult simulations currently needed for microlaser design, which would greatly simplify the design of arbitrarily complex laser systems. The researchers also plan to use their model to compare the statistical properties of DRLs to other disordered systems in photonics or electronics.

Laser scientists could also benefit from this breakthrough. If these new insights into the nonlinear lasing states of multimode lasers can be generalized, this new approach could be improve our understanding of the noise and coherence properties of new and complex lasers, a task that until now has required a fully quantum mechanical treatment of the radiation field.

"It will be fascinating to see if our new insights into the non-linear lasing states can be generalized and used to improve our understanding of the quantum properties of novel and complex lasers," said Türeci.