A special laser cooling technique originally developed for single particles has now been applied to a silica structure. 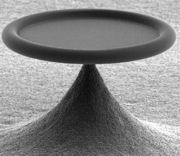 Researchers at the Max Planck Institute of Quantum Optics have successfully applied a technique called resolved-sideband cooling to a 60 µm silica resonator composed of 1014 molecules. They believe that their method could drive this microsystem down towards its ground state, and ultimately lead to novel optomechanical devices or techniques to combat thermal noise in microscopy.

Their experiment exploits the fact that if a laser is pumped into a silica microtoroid cavity that happens to have a mechanical oscillation period comparable to the photon lifetime, the motion of the mechanical mode can be reduced – in effect, laser cooling.

"This is not the same as a thermodynamic cooling measurable by a thermometer," explained the Institute's Albert Schliesser to optics.org. "What we mean by cooling is reducing the motion of one collective degree of freedom of the molecules, caused by their being coupled to the laser. This is closely related to earlier work in atomic physics for cooling individual trapped atoms or ions, but in our experiment we applied it to a structure composed of around 1014 molecules."

The coupling between the low-noise red-detuned 972 nm laser and the mechanical oscillations of the structure occurs because the oscillations modulate the round-trip path of the light, which is stored in an optical "whispering gallery" mode and briefly trapped by total internal reflection. At the same time, the trapped light exerts an outward pressure on the cavity, inflating it to an extent determined by the amount of light stored in the cavity. These forces can be out of phase with the oscillation, leading to an effective cooling of this mode.

The group had already shown that this technique can dampen the mechanical oscillations of their micron-scale resonator, but cooling the system down towards its ground state is made more difficult by the quantum noise exhibited by the photons, which drives the oscillator's molecules back towards random motion. Resolved-sideband cooling has been used to overcome this limitation in single particles, but now the technique has been applied to a larger system for the first time. 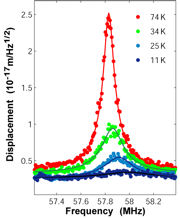 "Resolved-sideband cooling is the only technique that could be able to cool down to the ground state, using laser light tuned to an energetically lower-lying sideband of the absorption spectra," said Schliesser. Using a second independent laser system to measure the displacement, the team detected oscillations with an amplitude of only 10-18 m for a 1 s averaging time (10-18 m/Hz½).

Measuring the temperature to which the resonator falls involves examining the phase of the light emerging from the cavity and analysing it using Fourier decomposition. The group has calculated a temperature as low as 11 K for their resonator.

Applications for this work may not lie just around the corner, but it could allow removal of thermal noise in techniques such as scanning probe microscopy. "This is definitely still at the fundamental research stage and it's not clear if this cooling process will directly affect photonics technology," commented Schliesser. "But there is a general wish to remove background noise from measurements, or to harness optomechanical effects to operate switches, for example. This is a step towards that."