Image analysis will become the largest single sector, while demand for multimedia capabilities and high-definition displays continues to grow strongly. 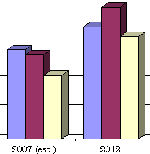 A new market report breaks down the imaging market into three sectors:

• Image display, which was the largest sector in 2007 valued at $15.2 billion, will grow to $19 billion by 2012 but be overtaken by image analysis applications.

• Image capture is currently a $10.8 billion segment and is predicted to grow to $17.4 billion, making it the fastest growing sector at 9.9% per year. It will remain the smallest of the three sectors, however.

Within these sectors, the top three individual markets over the study period will be printing inks, image sensors and imaging memory.

Growth in the global imaging market is being driven by advances in several fields. Medical imaging techniques for diagnostic and therapeutic purposes are becoming steadily more advanced, while in the consumer space the drive towards mobility and integration of rich multimedia capabilities in wireless handsets and the acceptance of high definition TV are becoming increasingly significant.

At the same time, steady growth in worldwide penetration of computing technologies for personal and enterprise usage, ongoing investments in defence and security-related infrastructure, and global research and development activity are also pushing the imaging components industry forward.

Electronics and Components in Global Imaging Markets (IAS025A) is available from BCC Research.