Optical chips that are commonly found in DVD players could pave the way for low-cost atomic force microscopy. 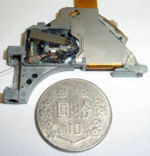 An optical DVD head is great for playing movies, but scientists in Taiwan have other plans for what turns out to be a treasure trove of technology. For just $20 you get a laser module with two operating wavelengths (655 and 790 nm), integrated optics, a high-bandwidth (80 MHz) photodetector and various output signals.

"A DVD optical head is a natural choice as a low-cost beam deflection module for atomic force microscopy (AFM)," Ing-Shouh Hwang of Academia Sinica's Institute of Physics told nanotechweb.org. "In a few years, we hope to provide high-performance AFMs and detection systems with nanometre resolution at affordable prices."

If all goes to plan, the group thinks that it could offer a complete AFM with basic functions for $15,000 or less.

Hwang and his team are not the first AFM developers to recognize the appeal of CD/DVD technology, but they claim to offer one of the best instruments of its type.

"Compared with previous set-ups, the major improvement here is the enhanced mechanical rigidity of our whole set-up. The objective lens, normally suspended with a voice coil motor, is now firmly fixed in position with epoxy," said Hwang. "To reduce the mechanical loop, we have designed a compact probe clamping module that attaches firmly to the frame of the optical head."

The DVD optical heads were easy to come by. Unfortunately, making sense of the chip's signal flow and drive voltages proved to be more difficult. According to Hwang, detailed descriptions of the component can be hard to obtain.

"Commercial manuals are often regarded as an industrial secret and this might be the first obstacle for people who would like to duplicate our results," he said. "After several frustrating attempts, we found a local maker of DVD optical heads – Topray Technologies – that was very open in providing the necessary details."

Like many CD/DVD optical heads, the group's chip operates according to an astigmatic detection scheme. When the measured object (in this case an AFM cantilever probe) is perfectly at the focus point of the laser, the light spot projected on the photosensor is circular. As the object moves up and down (for example, as the cantilever probe scans the sample surface) the light spot becomes elongated. By recording the chip's focus error signal, the researchers can capture the changing shape of the spot and so monitor the probe's deflection.

The optical head provides a resolution of better than 0.3 nm in the detection of vertical displacement and can also monitor the angular tilt of the cantilever probe. Taking its testing a step further, the group managed to capture the mechanical resonance of a micromachined cantilever probe that was driven solely by thermal fluctuations in the surrounding air.