A new laser technique could spot counterfeit gemstones without damaging the material. 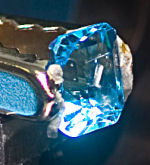 A team at New Mexico State University (NMSU) has used an ultrashort pulse laser from Raydiance to uniquely identify individual gemstones with certainty, and differentiate fake stones from the real thing. "Lasers have been used in the past to determine the type, origin and quality of gemstones, but until now we had never seen a laser that did not cause damage to the stone and lower its value," explained Nancy McMillan of NMSU to optics.org.

An optical technique called laser-induced breakdown spectroscopy (LIBS), in which a focused laser ablates a small area of a specimen's surface so that the resulting tiny plume of plasma can be analysed, has been applied to gemstones in the past, but with limited success.

The Raydiance platform, which delivers picosecond 2 µJ pulses at 1552 nm and 500 kHz, allowed McMillan to analyse for 100 s without this drawback. "The ultrashort pulses do much less damage," she confirmed.

"At this point in our research the disadvantage is that the spectroscopic signal does not seem as rich, possibly because fewer atoms are ablated into the plasma," commented McMillan. "Stones with many defects are also more prone to crack during laser analysis. We are working on improving the analytical protocols to minimize the damage and maximize the spectroscopic signal."

The technique could provide insurers and appraisers with a portable, turnkey analysis method, once a large database of gem compositions specifying the origin, history and chemical treatment of individual stones has been built up. Creating that database will involve analysing many gems, and ensuring that the minimal damage created can be hidden by the stone's setting or polished away.

McMillan has her sights on a variety of different gemstones, although not the most famous jewel of all. "We are working on emeralds, rubies, sapphires and other gems that have documented cases of fraud, such as sapphires diffused with beryllium, synthetic forsterite sold as tanzanite, and rubies treated with leaded glass. But diamonds are basically carbon with just a few other elements, so we aren't pursuing diamond chemistry."