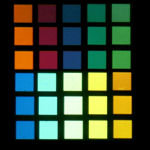 Nanowires can enhance the light-emitting efficiency of organic LEDs by up to 45%, say researchers in Taiwan. An added bonus is that the nanowires could replace expensive indium tin oxide as the anode in such devices. The technique might even be applied to liquid crystal displays to increase their brightness and possibly eliminate the need for colour filters (Applied Physics Letters 92 013303).

Organic light emitting devices (OLEDs) are promising for next-generation displays and lighting because they are simple to make. Although OLEDs are better than conventional inorganic LEDs in many ways, they do suffer from a low light-emitting efficiency of around 20%. This is because most of the light is trapped (due to total internal reflection) in the transparent substrate and the organic layers making up the devices.

Previous research extracted this trapped light by using dielectric microstructures or roughing the surface. Now, Pei-Kuen Wei of the Research Center for Applied Science in Taipei and colleagues have found that an array of 50 nm-thick gold nanowires placed on top of an indium tin oxide (ITO) anode can increase the light-emitting intensity of an OLED made from Alq3 by up to two times. The nanowires, which act as light scatterers, are placed 450 nm apart in the arrays. This period matches the peak emission wavelength of the emitted light, which enhances light extraction.

Wei told nanotechweb.org that the gold nanowire arrays might be used to replace expensive ITO in OLEDS because they are conducting and have a high optical transmission. "The concept of using metallic nanowire arrays for efficiently extracting light from a substrate could also be applied to LCDs," he added. Modern liquid crystal backlights use a thin glass or PMMA plate to guide light that may also benefit from light scatterers. Moreover, since the wavelength of the light scattered depends on the periodicity of the nanowires in the arrays, it might be possible to produce red–green–blue colours directly from the guiding plate without using colour filters, he said.

The team is now trying to find the optimal nanostructures for light extraction. It will also test various 2D periodic nanostructures, such as square or hexagonal nanodots, and other metals like silver.