A semiconductor laser that can be switched on and off by an external laser pulse could remove the need to convert light pulses into electrical signals in telecoms systems.

Physicists in the UK and Germany have harnessed the curious properties of soliton waves to create a new type of semiconductor laser that can be switched on and off using light pulses. The team believe that this "cavity soliton laser" could play an important role in all-optical telecoms systems, in which data are switched and routed without the need to convert light pulses into electrical signals and back again - processes that can slow down communications and create large amounts of waste heat.

The system, which is based on a vertical-cavity surface-emitting laser (VCSEL) built by the German firm ULM Photonics, was assembled and characterized by Thorsten Ackemann and colleagues at the University of Strathclyde in the UK (Phys. Rev. Lett. 100 013907).

Normally, a VCSEL emits laser light when a current is injected into the optical cavity. In this case, however, the team put a smaller current through the device so that it did not emit laser light. The device is coupled to an external optical cavity containing a diffraction grating, which defines the frequency of the light reflected within the external cavity. This frequency is deliberately offset slightly from the frequency of light within the free-running VCSEL.

The end result is that a bright spot of light forms inside the VCSEL. In fact, this spot is a soliton - a solitary wave that confines itself to the same area, and does not spread out into the rest of the cavity. Such self-confinement occurs because the soliton light continues to modify the local refractive index, while the step-change in refractive index outside of the soliton region prevents the light from moving into the rest of the material. 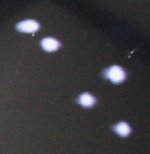 And it's this confinement that causes the intensity of light to increase rapidly, in effect creating a small laser at that location. The laser can then be switched off by firing a second laser pulse at the region, which further modifies the index of refraction and destroys the soliton. This procedure can be repeated at multiple locations within the VCSEL, which leads to an ensemble of "microlasers".

The present device emits near-infrared light with a wavelength of 980 nm, whereas telecoms devices operate at longer wavelengths. Ackemann told physicsworld.com that there is in principle no obstacle to the realization of similar cavity soliton lasers that operate at telecoms wavelengths and described this as a "challenge for the future".

The team are now working on miniaturizing the device, which currently has an external cavity that is 50 cm in length. Ackemann is confident that this can be reduced to several centimetres without too much trouble, and that it may be possible to create the entire laser on a single chip.

Last month, the Strathclyde group and European colleagues showed that a similar cavity soliton device can be used to delay the propagation of light pulses - another important function that could be used in telecoms devices (Appl. Phys. Lett. 92 011101). Ackemann said that the team are also trying to build cavity soliton laser devices that can both switch and delay light.

Progress will rely not least on achieving high-quality growth of the VCSEL structures. The devices were fabricated by molecular beam epitaxy - a technique that is used to make semiconductor lasers for commercial use. Ackemann described the process for advancing the cavity soliton lasers as "difficult but possible".