Detecting the spin Hall effect of light could enable position measurements to be made with picometer resolution. 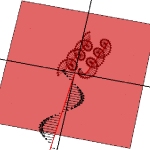 Shine a beam of light into a block of glass and you would expect it to change direction because, being denser, glass has a larger refractive index than air. You might not, however, expect the beam to split in two. Although only slight, this "spin Hall effect of light" has now been measured by physicists in the US, and the team claim their technique could open up avenues for detecting any particle or field with high accuracy.

Discovered nearly 130 years ago by Edwin Hall, the Hall effect describes how a transverse magnetic field can deflect a current of electrons as they pass through a metal sheet. More recently, physicists at the University of California, Santa Barbara, showed that a related phenomenon arises without a magnetic field for an electron current in a thin semiconductor. Known as the spin Hall effect, electrons with their spin pointing up veer to one side while electrons with their spin pointing down veer to the other.

Now, however, Onur Hosten and Paul Kwiat of the University of Illinois at Urbana-Champaign have for the first time measured the spin Hall effect for light. In their experiment, the spin-up and spin-down electrons are replaced by light with left and right circular polarizations. Meanwhile, the role of the electric field that drives the electron current through the semiconductor is performed by the transition from a low to high refractive index as the light passes from air into glass.

“We believe we can achieve a resolution of picometres.”

The spin Hall effect for light should exist any time a beam of linearly polarized light, which comprises equal components of left and right circular polarization, enters a medium with a different refractive index. The left and right circularly polarized components will instantly shift away from each other and then continue to travel in parallel (see animation: splitting light). However, the separation is so small — on the order of nanometres — that the two beams will invariably still overlap each other.

The separation is small because the glass interface is essentially carrying out a "quantum weak measurement" of the polarization of each of the incoming photons. This type of measurement is often used in quantum information experiments to glean tiny amounts of knowledge about a system without disturbing it, but Hosten and Kwiat have instead tried to maximize its disturbance by forcing the light beam through polarizers before and after the interface.

Using this method they amplified the separation by a factor of 10,000, which enabled them to detect the two components using a position-sensitive photodiode .

Why does the separation occur at all? The light beam is composed of many plane waves. When the beam changes direction at the air-glass interface, the polarizations of the individual plane waves are rotated by various amounts. However, because this polarization rotation is equivalent to a phase shift, the resultant waves interfere with each other to create two separated beams.

The Illinois team is now planning to improve on their technique. "We believe…we can achieve a resolution of picometres," Hosten told physicsworld.com. But they are also keen to see it used on other systems. "The technique is not limited to position measurements, it is universal,” Hosten added.