Shrinking the pixel size by a factor of 1000 has allowed Kopin to increase the resolution of its smallest microdisplay to meet the SVGA standard. 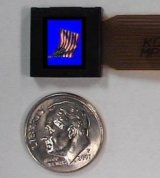 Kopin says that the new display, which measures 0.44 inch diagonal, is the smallest color SVGA display in the LCD industry. The device has a resolution of 800x600, but has the same size as Kopin's current CyberDisplay VGA display – which has a lower resolution of 640x480.

According to Kopin, the new display is the culmination of company's development program to shrink the full-color pixel size to 11.25 µm2. Previously, the smallest size of a color pixel was 14.1 µm2.

"There has been substantial concern in the past that the pixel size of our CyberDisplay LCD could not be reduced further," said John Fan, Kopin's president and CEO. "We have now shrunk the pixels by more than 1000 times compared to those used in current LCD TVs.

The problem for Kopin has been that its display technology is transmissive, which means that each pixel must also accommodate the transistors needed to control the light output. "We need to place the pixel transistors around a pixel and leave enough opening for light transmission," Hong Choi, Kopin's chief technology officer, told optics.org. "In order to shrink the pixel further, we need to use smaller transistors."

Other complications are caused by the large step height in Kopin's display structure. "As the pixel size becomes smaller, the diffraction and birefringence effects become stronger, increasing the crosstalk and reducing the contrast ratio," said Choi. "The other difficulty is laying out the control circuits in a smaller area."

The crucial advance needed to address these problems has been the introduction of 8-inch silicon processing, which enables the fabrication of smaller transistors and the use of planar mutlilevel metallization. This process makes it easier to route and layout of the control circuits, and also simplifies the topology surrounding the optical aperture in the pixel.

Kopin already produces an SVGA display with a 0.59 inch diagonal, and which consumes about 100 mW of power. In contrast, the surface area of the new device is some 45% smaller, while power consumption has also been reduced by around 30%.

Choi says that Kopin has also improved the uniformity and reproducibility of its nanotechnology-based process for aligning the liquid crystal material in its displays – although this has not contributed to the reduction in pixel size. "We also improved our liquid crystal assembly process to get more precise cell gap and more uniform display characteristics," he added.

A key market for the microdisplay will be in video eyewear applications, where the combination of sharp images and small size is crucial for success. "Conventional LCD TVs and laptop screens can now be reduced to fingernail sizes, which could open major applications for displaying high-resolution images in mobile portable devices," said Fan.

Kopin demonstrated the new display in a private showing at the Consumer Electronics Show in Las Vegas. Samples are now available to selected customers for evaluation and design-in, with full-scale production due to start in the second quarter of 2008.